Ang Lee’s adaptation of Yann Martel’s award winning novel is a visual poem to story telling, how we see and share the events of our lives, and faith.

I first read the novel in 2008 (I was a little slow to the party – it was first published in 2001) and I raved about it to anyone who would listen. It was fantastic storytelling, and when I first heard that it wasn being adapted for the big screen, I was both anxious and excited… how were they going to pull this story off?

The film, as in the novel, tells the story of Piscine Molitor Patel, or Pi, as he prefers. The film is framed in an interview that a writer (Rafe Spall playing Mr. Martel) conducts with Pi (Irrfan Khan) in his Montreal home.

The film takes its time, introducing us to Pi at various ages growing up in India, where his father (Adil Hussain), a sceptic and facts-based man, runs a zoo. His mother (Tabu) encourages his examination of the different religions, advising him to seek a balance in both heart and mind. His brother Ravi, is quite happy to simply make fun of his multiple beliefs.

As he experiences the first pangs of love, Pi (Suraj Sharma) learns that his father has to sell the zoo, amid Indian poltical concerns, and they are moving to Canada to find a better life.

Transporting the animals to their new home in America, the Patel family travels aboard a Japanese freighter. 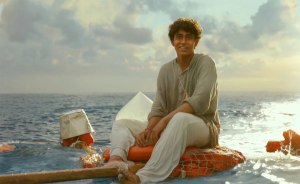 Up to this point, the film is lovely to look at, in fact the opening credits are fantastic, as we move through the zoo and see all the animals that inhabit it, but it’s when disaster strikes, a brutal storm that causes the sinking of the ship that the visuals of the film reach stunning and gorgeous heights.

Pi is fortunate enough to escape the sinking ship, with the aid of a few of the ship’s crew, but soon finds that he’s not the only one on the 30-person life boat. He’s sharing it with a giant Bengal tiger from his family’s zoo, named Richard Parker.

The two are trapped together and struggle to to survive together, fighting over food, and whether Pi is going to be food.

There are some stunning visual sequences, and the film makes gorgeous use of the 3D format, the jellyfish sequence is probably my favorite, an entire ocean at night lit up bu lumiescence. Wow.

Richard Parker is an impressive achievement, I’m sure they used a real tiger in some shots, and the rest of the time he was computer-generated, but I would be hard pressed to pick out all the CG work. Richard Parker is as real as Sharma – there was not one moment that I didn’t believe he was a real tiger, perhaps because I saw so much of my own cats in him (and they both seem to think they’re tigers).

There are some wonderful moments in the film, some that make you smirk and smile, some that are simply heartbreaking, and others that are inspirational and stunning.

At it’s heart, the film is about faith in something bigger than ourselves, trusting to it (something I’m not always willing to believe or eager to do) and how we tell and share our stories.

We each carry around our own mythologies, the stories that make up our life. We may alter some of them to beter fit into a tale we tell, or to make a point either for others or ourselves, but they are true for us.

And Ang Lee, through David Magee’s adaptation of Martel’s novel, tell us a wondeful story.

In the end, I wasn’t as taken in by the movie as I was the book, but both formats gave me the same wonder, joy, laughter and tears.

Did you see it? Did you read it? 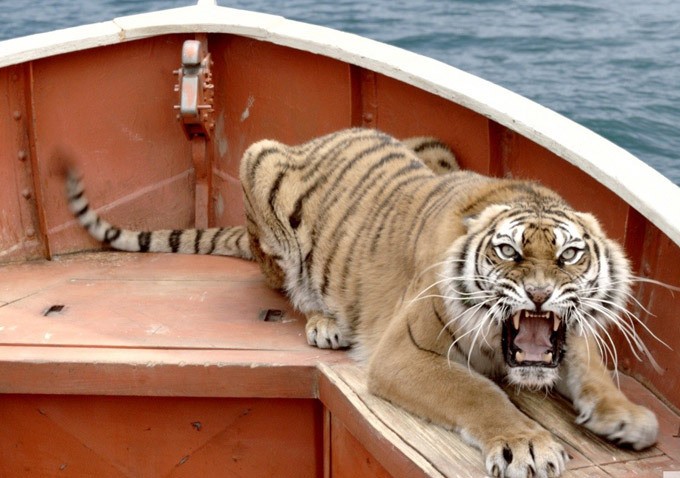