Somehow we’ve come to the end of the first season of Showcase’s enjoyable sci-fi series Continuum, and it ends explosively!

It also ties up a number of story threads for the season while setting up ideas for season 2.

We see things happening in our 2077 opener, that tie directly back to the first episode of the series, the destruction of the building while CPS Protector Kiera Cameron (Rachel Nichols) and her team are arresting Liber8’s leader Kagame (Tony Amendola).  We learn that Travis (Roger Cross) and Lucas (Omari Newton) are responsible for triggering the explosion, being rescued from the building’s collapse by Garza (Luvia Petersen) in a jumper.

Back in 2012, we learn that it is Kagame’s birthday, Sonya (Lexa Doig) gives him a copy of A Tale of Two Cities. In return he gives her a key to a safe deposit box which he promises will give her answers to her questions, including future plans and leadership for Liber8 here in 2012.

Kiera wakes aboard Kellog’s (Stephen Lobo) boat, and before she leaves reclaims her piece of the device.

As she leaves she receives a call from Carlos (Victor Webster) who informs her that there is someone, an Agent Krycek, sorry Gardiner (Nicholas Lea) here investigating Liber8 and the theft of a huge amount of explosives.

Gardiner does some investigating and begins to wonder if Section 6 even exists, and begins to suspect Kiera may be a Liber8 plant.

It’s only when Kiera comes across a rather eccentric fellow, Jason (Ian Tracey), who claims to be from the future as well, in fact from the very execution she was attending, and that today is the day that everything changes… there’s going to be an attack!

It’s ok though, because apparently he’s built a time machine, and just needs her piece of the Device to make it operational.

What follows is a rapid-fire episode that sees Julian (Richard Harmon) joining Liber8 only to be caught as a suicide bomber by the police while Kagame sacrfices himself, seemingly at future Alec’s (William B. Davis) bidding!

Gardiner sees Kiera use the tech of her suit twice! 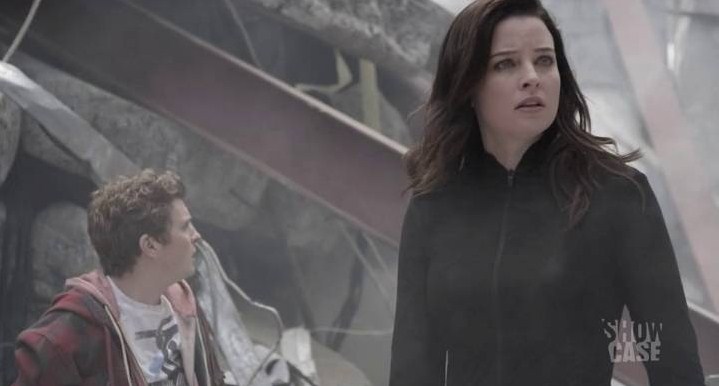 And we learn two troubling things…

That there may be privateers from 2077 here in 2012, including someone known as Mr. Escher. It is this shadowy figure who re-establishes Kiera’s cover, and calls Agent Gardiner off of his investigation of her and Section 6.

Most troubling of all though, is that all of it, sending Kiera back to 2012, as well as members of Liber8, was all the brainchild of future Alec, who gave the Device to Kagame himself!

We find that Jason is a little more unstable than we thought, and when Kiera sees the machine he’s designed, including the neccessary tinfoil helmets, she walks away, reclaiming her piece fo the device, tears streaming down her face as she realizes she’s not going home yet.

And in the final moments of the season 2012 Alec (Eric Knudsen) tells Kiera this, (via a file his future self sent back with Kiera) as well as this tantalizing cliffhanger… that she won’t believe the reason why she was really sent back in time! 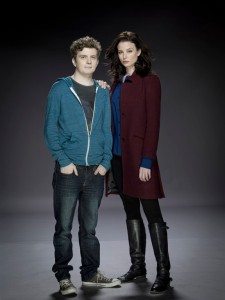 This episode brings forward an interesting concept of future history, that it is a tidal wave, a tsunami racing to the shore, and while you may have a bucket, and can change part of it, altering time if you will, it won’t change all of it, in fact it may barely impact it’s overall path, and you’ll only drown in the process.

Suggesting that there is a destiny, a path pre-arranged for us, or at least the characters of the show, and that anything they try to do to alter it, will have little to no effect.

And here’s a thought… Kiera tries to stop the explosion that claimed thousands of lives, signifying the start of the revolution, Theseus Day. If she had changed it, altered it, then any future she would’ve returned to should be drastically altered, including the high probability that neither her husband nor son would be waiting for her. Shouldn’t she be making sure that events don’t deviate? How will that weigh on her ethical and moral code? Is the possibility of the continued existence of son and husband worth sacrficing thousands of people? She didn’t have to find that out in this episode, as the disaster did happen, but has she thought about that?

Any changes she makes should directly affect the future… though will it? Kellog is still with us. Is it a multi-verse? Is it a closed temporal fold or bubble? Are they simply foam on the breaking crest of the unstoppable tsunami of the future?

Who is Escher? Why is Kiera really here? How set is the future? Will Kiera get home? How much can we trust Alec now? Is Julian in prison until 2077, if not, what other atrocities does he commit to be sent back to jail? What other privateers are back in 2012 and what exactly are they up to? Is Gardiner going to be a growing thorn in Kiera’s side?

And how long do we have to wait before they even go to work on Season 2?

What did you think of the finale?

Mr. Simon Barry, you need to call Sue and I so we can chat!