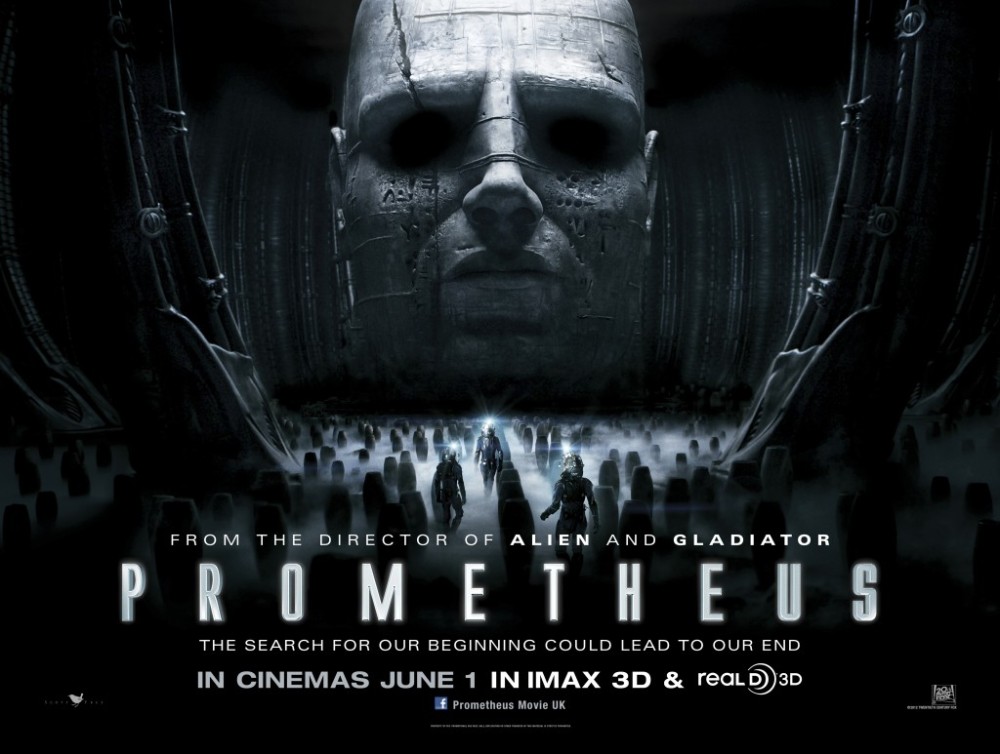 Prometheus is a film with some big ideas.

This is a film I’ve been looking forward to since I learned Sir Ridley was returning to the universe that he helped create and establish.

Is Prometheus a perfect movie? Far from, many of the secondary characters and even some of the leads are interchangeable. But it’s the questions the film raises with its themes and concepts that I most enjoyed.

Well that, and the fact that I think Ridley is one of the best technical directors working today.

Before we go any further, I should say that everything below, despite the fact that it’s mostly questions and thoughts, could be deemed highly spoiler-y… Proceed as you deem necessary…

The film is gorgeous to look at and the details are many and layered. The Prometheus, the exploration craft sent looking for our creators (I’ll get to that) isn’t some space tug like the Nostromo. This is a top of the line craft and it’s gorgeous, especially the lower deck of the bridge with its sweeping windows, as well as Vickers exclusive quarters.

Noomi Rapace plays Elizabeth Shaw, a passionate believer. In this case, she believes that clues left all over the earth spanning all cultures and thousands of years are an invitation to journey out into space and meet the beings that created us, by planting their DNA, and subsequently ours on primordial earth.

Things, as they do in these films, go quickly sideways but also raised a lot of interesting things to talk about…

Like why should our creators treat us any differently than we treat our own creations, whether technical, mechanical or biological?

Who created these Engineers?

And the Engineer at the beginning clearly sacrificed himself to plant our DNA, however the ancient art clearly shows the presence of these beings – why did they come back? Were they simply studying us, guiding us, ruling us?

The film moves from earth on the cusp of the 22nd century to the same system as 1979’s Alien, but that we know takes place on LV-426. This film takes place on

Although it leads me to question how the derelict got to 426, did it leave from 223 and crash there when the chestburster arrived on the scene?

That means there’s more installations out there, which we know. But what else did these Engineers create? Are there other planets out there with human-like life on them?

Which leads me to the beacon that rouses the Nostromo crew. It’s not a human signal, and it’s a warning, obviously about the xenomorph, and did the signal that the Prometheus sent get cut off when it sacrificed itself or did the lifeboat keep transmitting it. If so, who turns it off?

And despite their size, the Engineers don’t seem to be as big as the Space Jockey seen in the first film, are there different breeds or class structures at play?

And will the next film, if greenlit follow Shaw on her continued exploration or will it follow the development life on LV-223 now that it’s growing?

Of all the characters Michael Fassbender’s David is the strongest and the most intriguing. He’s in a class all of his own as the artificial person aboard ship, his Weyland emblem fingerprints categorizing him as little more than property, a servitor and a perfect representation of how we treat our creations… 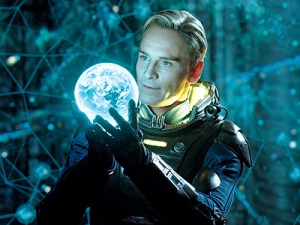 We watch as he works for and around his fellow travelers, or as he travels the empty decks alone before they are woken from their hypersleep.

Charlize Theron (sigh) plays company lady Meredith Vickers, and is haughty and treats everyone around her like so much chattel.

I always enjoy Idris Alba and delight when he shows up in a film, in this he plays Captain Janek, not quite as relaxed and down-homey as Captain Dallas, but he is still captain of his vessel, willing to make the hard decisions.

The things I really enjoyed were the equal senses of wonder and trepidation as the ship landed and came across the deserted (?) installations. I love when I’m so involved in a movie that when it hints at things like other cultures I wonder who they are, what are they like, what stories do they tell one another? For me this film did that. 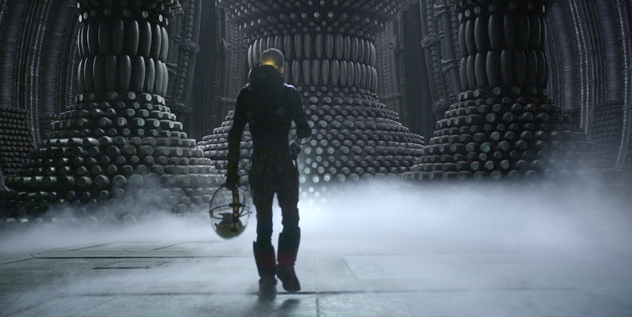 It teased us with just the briefest of hints and clues as to the true nature of the Engineers. I don’t believe the entire race is like that. Janek posits that these are military installations and that means a specific mindset and dedication to task and duty, which is what we see happen after David learns their plans.

Ridley makes wonderful use of 3D in his film, using it to add depth to his images as opposed to having things pop out of you, and I loved the film’s opening, as well as all the traveling shots, near and far featuring Prometheus flying.

I also really enjoyed Marc Streitenfeld’s score, there are some haunting motifs I’ve already found myself whistling and they can elicit wonder, solitude, and caution all with the same notes, sliding them from instrument to instrument.

It’s already on repeat on my iPod.

There will no doubt be people unsafisfied with this film, expecting more of Alien(s) than is given here (yes there are a couple scares (and a wicked med-bay sequence) and the film feels downright claustrophobic at times especially in the pyramid) – but this is a film that wants to ask the big questions or at least make you think of them. And let’s be honest, that will not be everyone’s cuppa, but for me, it did its job and did it well. I’m going to go see it again.