Last night was a treat for both Sue and I at the Worldwide Short Film Festival featured was a program called Celebrity Shorts and every one of them was a delight.

We started with a heart-warming and joyous tail featuring Dame Judi Dench, and a cameo by Tom Hiddleston in a short from the United Kingdom called Friend Request Pending.

The story follows a mature woman who turns into a nervous mess after she messages a man, she met recently met at a social, through Facebook. Watching Dench, was just a hoot, and had the audience laughing, as we all watched the dialogue box on her computer hopefully. This could have been the only short we saw and the evening would’ve been a success as far as I was concerned.

Next up was The Carrier, from the United States featuring Rita Wilson, Anna Paquin, and Chad Michael Murray. Thatcher (Murray), who has tends to sleep around a bit, is killed in a car accident, and his mother (Wilson) is left to pick up the pieces. After receiving some terrible news from her son’s doctor, she makes it her mission to contact all of her son’s former lovers and talk to them. She learns so much more than she thought she would about her estranged son in this story of loss and love.

If you said “polar bear and David Duchovny” to Sue, she’d said you had her at polar bear. This is the best of both worlds, with Duchovny voicing a wry polar bear in this U.S. short The Beaufort Diaries. The tale follows a polar bear relocates from his ice floes to Hollywood, and through addiction and corruption slowly loses his mind in California’s Dream Factory.  Some wicked one-liners that I’ll have to see again, cause you were laughing so hard at something else. This one was a lot of fun – ice, ice, baby.

Which you can actually see here… and visit the official site here. 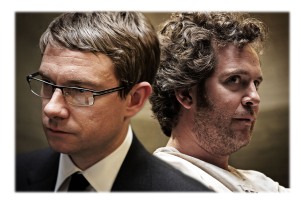 We hop across the pond to the UK to resolve The Voorman Problem. This one, like all the best English comedies is both absurd, brilliantly funny, and cleverly written.

Dr. Williams (Martin Freeman) is asked to examine a prisoner (Tom Hollander) as the warden hopes to relocate him to a mental hospital as he’s got himself, and all the prisoners convinced he’s god.

The two banter, jibe, and slowly begin to realize the impossible as the ending is thrust upon you with an enjoyable twist.

And I’m sure the Belgians don’t miss Belgium at all.

France takes center seat next with an engaging, and relevant short called The End. Charlotte is in for the eve, and getting ready to join her friend for dinner, when one of her films comes on the telly. Imagine her shock and anger to find out she’s been digitally replaced by another actress! As he life’s work is slowly taken from her, though she’s allowed to keep her awards, the short delves into Hollywood’s recycle bin… colorizing, remaking and replacing actors. As I sat in the theater, my mind mentally checked off all of these as having already happened. All of this causes Charlotte to have an existential crises of epic proportions…

Butteflies, a 2 minute short from the States, was the only real let down of the evening. And it was only a let down in the sense that we were expecting something different. Starring John Malkovich, the short short posits the question of whether television, the opiate of the masses is a doorway to heaven or hell. I was expecting a fun tirade and rant, but was treated to an eerie hallucinogenic journey centering around Malkovich sprawled on his chair with his television pandering to him in the corner.

Rainn Wilson takes to the stage in the U.S. short that is a bloodbath titled Blitzen Trapper Massacre. Wilson approaches the band as their number one fan, and is pushed over the edge when they deny him a chance to jam with them during the show. Pushed too far, Rainn takes matters into his own hand and wreaks his vengeance on the band before performing their show himself. Funny, horrific, and bloody fun. 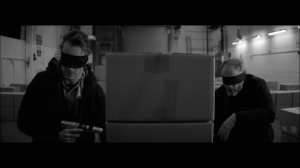 We travelled back across the pond to the UK for the last short of the evening, Pitch Black Heist.  Starring Liam Cunningham and Michael Fassbender, this black and white caper film was highly enjoyable, as we learn that safe’s contents aren’t the only secrets in this romp.

The two actors have some great chemistry together, and watching them train for the robbery, which must take place in a pitch black environ because of light-sensitive alarms, is a hoot. Almost as much as them sitting around in a pub, waiting for the go-signal.

The two sit and wait, drinking, smoking up and playing pool, in a wonderful scene, as we watch Fassbender’s character, who is barely tolerant of Liam’s begin to loosen up a bit, and as they stumble, stoned and drunk to their destination, one last secret is revealed in the darkness as it’s broken by a flickering match.

This was a great series of shorts, each one entertained, was a strong piece, and were great fun. It’s going to be hard to top this night… but we’ll just have to wait and see…