Brian DePalma’s classic from 1976 finds its way onto the 101 Horror Movies and I was more than happy to revisit it.

I watched it a long time ago when I was a teenager going through my Stephen King phase, which every teen seems to go through (Salem’s Lot is still my favorite King book).

However on revisiting it I realized one thing… almost every relationship in this film is dysfunctional and abusive, whether physically, verbally or mentally.

On it’s release the film garnered Oscar nominations for Sissy Spacek’s portrayal of Carrie, and for Piper Laurie’s twisted performance as her mother Margaret White.

Based on the novel of the same name by King, the film follows Carrie, who lives in a repressive blindly religious home with her single mother who thinks everything is a sin, and never even warned her daughter about her menstrual cycle, which when it finally begins in the school showers terrifies her, and allows her classmates to belittle her endlessly.

However, with this onset, also dawns something equally empowering as her womanhood… telekinesis.

One of her classmates, Sue (Amy Irving) feels bad over what transpired in the locker room, and knowing Carrie has a crush on her boyfriend Tommy Ross (William Katt) urges him to ask Carrie to the prom as redemption.

With the support of her teacher, Miss Collins (Betty Buckley) she begins to see herself as more than what people think she is, and finally acquiesces to Tommy’s invitation. 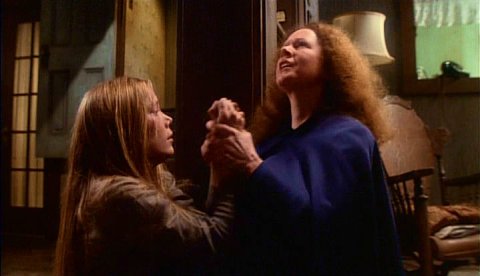 Not everyone offers their support, her mother continues to bully, dominate and abuse her, locking her in a ‘prayer closet’ with a creepy looking crucified Christ, and a classmate Chris (Nancy Allen) refuses to let it go, hatching a plan with her less than clever, but abusive boyfriend Billy (John Travolta), whom she manipulates with her sexuality.

While Carrie prepares for her prom, her classmates are filling buckets with pig’s blood for the last act of the film.

Her mother warns her that they will all laugh at her, that she’ll come back in sin, and have to pray.

She goes anyway, and she and Tommy have the only relationship that seems innocent and honest, Miss Collins may be one as well, but she is not a peer but an authority figure.

The two have a wonderful evening, until Chris rigs the election of the prom king and queen, ensuring Tommy and Carrie win, getting her onstage beneath the waiting bucket of blood.

Sue arrives, and puts it together too late, as Miss Collins shoves her out of the gymnasium, thereby saving her life when things go sideways moments later when Carrie is drenched.

DePalma makes wonderful use of split screen to show the bloodbath and destruction that follows, as all the terrible things that have been said to Carrie circle in her head over and over. She sees everyone laughing at her, including Miss Collins (which leads me to think it’s her perception of events not actual events – I don’t think Miss Collins would do that and in fact we see her rush to Carrie’s side and Tommy’s aid). She deals out her vengeance and no one survives or escapes.

The sequence, in fact the entire film, is wonderfully cut and directed, telling a powerful story of a young woman who has been pushed down for far too long, bullied, mocked and abused, her womanhood denied until finally, she reclaims herself, though it appears to cost her her own life.

The film is well paced, well made, and some of it, in terms of the abuse and bullying that Carrie is on the receiving end of, seems just as important, if not more so today.

Both Spacek and Laurie are fantastic in their roles, and this is DePalma at his best, the technical aspects of the film are fantastic, the cinematography, editing, and music work wonderfully in concert to put together a very nice adaptation of the original novel.

And yet for some reason… they’re going to remake it… again.

Some films, and series work with remakes and reboots, but I’ve found that with most horror movies (though not always with science fiction movies) the original is always the best.