It would seem that a fluffy and mostly-white army has descend on the Metro Toronto Zoo as of late!  First, we met our most a-dork-able polar bear cub, Hudson.  The little guy is growing in leaps and bounds, and never fails to entertain with his adolescent antics.  Hudson had my heart from the word go, and I overflow with giddy joy every time I see him.  I’m so happy that we get to watch him grow up, almost right before our eyes! 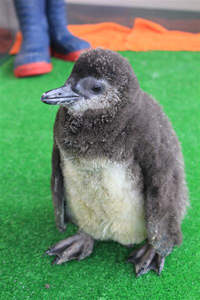 Up next to the fluffy baby pool was Eldon, our first South African Penguin to result from the zoo’s breeding program.  He was a downy mess when we first caught a glimpse of him, but he’s quickly grown to look more sleek and penguin-y in recent weeks.  He’ll be a swimming fool with the others before we know it!  We ALSO noticed that he has lately been joined by two more downy messes, and I can’t wait to watch them develop and grow along with him!  I don’t know what it is about penguins, but to me, they always look super-happy – and very well-dressed. 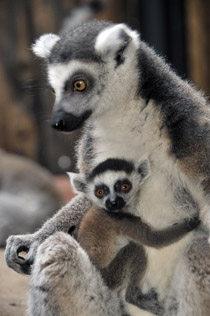 Another favourite group of animals just added a baby to the mix, as well, and the zoo is very proud to present a wee lemur baby!  Last I checked, we weren’t sure of the wee gaffer’s gender, but we caught a glimpse of a super-cute little head, and I knew then that I was done for.  Good grief.  🙂

A new little Golden Lion Tamarin has also been born, but I’ve yet to witness that particular bit of cuteness – maybe next time!

Our most recent trip to the zoo was also our briefest, as we were invited to attend a Members-Only preview of the new White Lion cubs who’ve just been put on display!  A rare breed, these two girls and a guy arrived at the beginning of May, and we were there to see them check out their new paddock and react to having an audience as they did so!  One of the female cubs was still in quarantine, but the other two provided some amazing and beautiful entertainment.  It was a little like watching my kitten girls, Flynn and Piper, explore the apartment when I first brought them home from the shelter.  These young ones alternated between exploring, resting, playing, wrestling and chasing one another as the sun broke free of the clouds long enough to set over the horizon.

This was actually the first Member Event that Tim and I were able to attend since we purchased our memberships last year.  We’ve been making good use of them just by heading out to Rouge Valley at pretty much every opportunity, but this was the first time we’d been able to go in after the zoo itself had closed for the day, and watch as all of the nocturnal critters we are used to seeing in a more relaxed afternoon nap-type mode, begin to come alive with activity.  The hyenas were chasing each other around their paddock, for example, and that for us is a rare sight.  Also a creepy one.

The white lion furball pair seemed at ease with their surroundings, and with one another, as the crowd looked on.  In fact, they were never very far from one another for very long, choosing instead to wander for a bit, and then reconnect with one another a few minutes later.  Both were unspeakably cute, and seem to have strong personalities of their own already.  I’m so excited and grateful to have the chance to watch these youngsters grow to become the majestic jungle rulers they were born to be!

Finally, though we didn’t get to see them that night, we know they are back again for this summer only, and can’t wait to dive once again into the Sharks at Stingray Bay exhibit.  Tim and I discovered the joy of this one early in our zoo adventures last spring, and we make it a point of heading in for it as the last thing we do before we leave for the day.  Basically, there is this huge elongated shallow pool and it is filled with various types of shark and stingrays – and you get to PET THEM!!!  You all know of Tim’s love of Jaws, so naturally he was excited from the get-go, but it didn’t take me long to wish a shark would come close enough for me to touch it.  One finally did, and I was thrilled with its rubbery feel, but by then I’d long since been hooked by the stingrays of joy that were racing around the length of the pool.  We haven’t even fed them yet (though I intend to rectify that this summer), but there were some of the smaller ones who seemed to know where Tim and I were each time, and they’d not only cut across the pool to get to us, but some would even turn around and come back for more immediately!  They’d slow down and rise up to meet our fingertips below the surface of the water, and deliberately dawdle under our hands before moving on and coming back around again.  So soft, silky and sweet, they are!  🙂

The Sharks at Stingray Bay are easily one of our favourite things to do at the zoo, and I’m a little heart-broken that this is their final year with us.  I will very much miss the beautiful elephant ladies when they take off for a warmer climate, too.  However, I’m sure Hudson’s antics will continue to charm and keep my spirits up for a long time to come yet, and with all of the new creatures coming to the zoo in the near future (GIANT PANDAS), I imagine I will have new additions to my favourites list soon enough!  For now, though, make sure to check out all of the amazing things our zoo has to offer each and every day.  Things are constantly changing, which means the delights of today won’t necessarily be there tomorrow.  Nothing gold can stay, so get thee to the ZOO, Ponyboy!!! 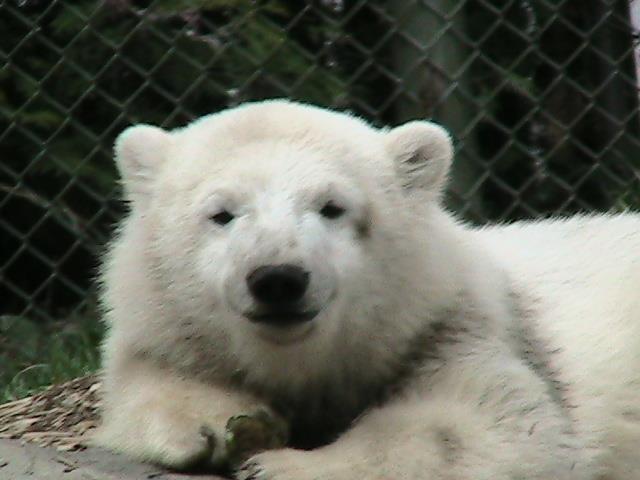