101 Horror Movies continues to serve me well in showing me some horror films I have never seen (as well as a lot I am really enjoying revisiting).

The Masque of the Red Death, based on an Edgar Allan Poe story seems to walk a fine line between B-movie horror and art, as a wondering red-robed figure stalks the medieval countryside.

Vincent Price, who I last saw in The Tingler, chews the scenery deliciously as Prince Prospero, a rather sadistic ruler of a little fiefdom, which he demonstrates in his opening scene, by toying with the lives of two men, one the father, the other the beloved of the virginal Francesca (Jane Asher).

Then upon discovering an old woman suffering from the plague of the Red Death in the village, he orders it burned to the ground, spiriting the trio off to his castle.

Imprisoning the men in the cells of the castle, he keeps Francesca by his side, toying with her religious beliefs as he reveals to her that he worships the one true good, the fallen angel… The Devil himself.

While the countryside suffers, Prospero invites fellow nobles to take refuge in his castle, safe from the troubles of the world outside, while the revel in orgiastic parties and dinners, and theatrics. All the while he attempts to corrupt Francesca, but there are other machinations occurring within the walls of the castle as well, and it all comes to term at a final masquerade party when an univited guest in red robes begins to stalk Prospero.

The bright uses of color serve the film very well, reveling in the blood of the red plague, and making the red-robed figure stand out against the dark backgrounds of the exteriors.

But the best part of all was Price, just having a gleeful time being sadistic, murderous, and just an all around bastard, until he receives his comeuppance.

This one, was a fun little film, that will be enjoyed again I do believe. 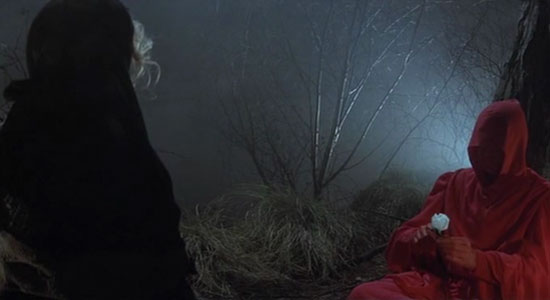