Episode 4, puts us past the halfway mark, and leads us racing towards the end of the first season (which implies there will be a second season, and personally that’s the way I like to see it).

Ali Liebert, in our interview with her earlier in the week said this episode pushes her character outside of her comfort zone, but I think we can use that idea and apply it to every one of the lovely leads.

Kate (Charlotte Hegele), completely wowed by the music of Billie Holiday seeks out Leon Buck (Jim Codrington) again, something none of the women are comfortable with, but she does it. Why? She wants to sing like Billie, and who can blame her? So Leon tells her not to sing from her throat, but where the music IS, in her heart, and to use her diaphragm to amplify it. The innocence and joy Charlotte continues to bring to her performance is a delight, Kate sees the best in people and doesn’t judge them, while in some people this could be seen as naive, Charlotte just makes it honest. Kate would be someone you’d be lucky to have in your life. 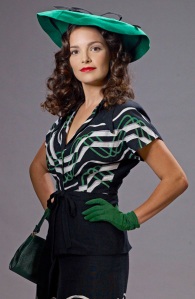 Gladys (Jodi Balfour) has a tough time, after being spurred on by the screening of Suspicion, she did something her mother never did in her own relationship… She confronts James about his infidelity with Hazel, keeping her own indiscretion quiet. While determined and spirited, Gladys needed the push provided by Cary Grant and Joan Fontaine in the film to push her out of her comfort zone into dealing with her issues with James (Sebastian Pigott). It also drives her to a night out of drinking and fun with a newsreel director Russell Joseph (Graham Abbey). Jodi runs a gambit this week, from outrage to heartbreak. Gladys is starting to realize that the world isn’t what she wants it to be, though she’ll be damned if she is gonna sit down and take it. Jodi has a ferocity to her performance that has you rooting for her character. Her heart is in the right place, so even if Gladys seems a little top-shelf sometimes, you know she’ll do right by you. Cause that’s who she is.

James had his own problems thanks to Haze (Brittany Allen)l and needed a penicillin shot. He reveals to his doctor that he only slept with her so he could be more experienced when he and Gladys are finally married. Huh. 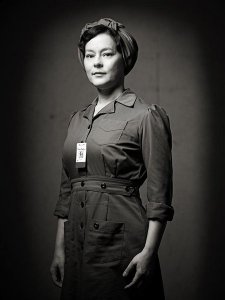 Lorna Corbett (Meg Tilly) has a lion’s share of things that push her out of her comfort zone this week, but most can be summed up in one word Marco (Antonio Cupo). Things are strained at home with Bob (the awesome Peter Outerbridge) as he continues to write letters for Edith’s (Lisa Norton) children, continuing the facade that their father is still alive.

To thank him, she brings him dinner one night, and Lorna is a little put out, when she discovers them at table together.

It doesn’t help that things heat up between her and Marco either. He admits he’s still thinking about their kiss, and in a moment of passion, the two embrace their passion for one another.

Meg brings real depth to her role, because, I couldn’t judge her on what happened. Lorna’s lonely, she loves her husband, but is unable to connect with him anymore. She’s also really hurt that Edith seems to be able to and it’s because of her that Bob finally begins to write to their sons in the war. Though Lorna ominously says, “It’s too late for that.” She just wants to feel something that isn’t about the war, and Marco gives her that.

The final scene of the episode, you can see that both Bob and Lorna because of the war and his injuries  kind of grate on one another, but you can also see, as they fight to get a box kite into the air, that they are both trying, in their way to work around it. The last shot of the episode is a gorgeous shot of Lorna sprawled amongst the leaves watching with a look of hope, and a little wonder, at the kite in the sky. 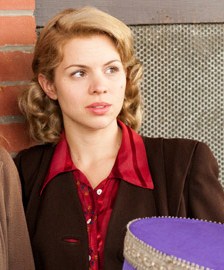 And then there is Betty (Ali Liebert). She has quite the week. Russell Joseph and his news reel team are on site to film the making of the Millionth bomb in the factory, and they are look for a girl to make the focus of the story.

Lorna believes it should be Betty, because she thinks she’s the best and hardest worker. That gives Betty pause, you get the impression she doesn’t tend to get such positive feedback a lot.

Betty agrees, and then, begins to regret it almost immediately, as she’s dolled up, and looks truly uncomfortable, made to act and emote for the camera in a sequence that she feels is a complete fallacy and presents the wrong image of a Bomb Girl.

How right she was.

When the film is shown to the girls Betty is embarrassed and angry. It’s a complete misrepresentation of who she is. They show her as glamorous, living in a house, with two children, waiting for her husband to return from the war so that she can happily leave the factory and resume her wifely duties.

Betty wants none of those things.

What she does want is to share as much of her life as she can with Kate. I so love watching the two of them together. Ali is wonderful in these scenes. Yes, she’s great when Betty is her swaggering self-assured self, but when she lets that visage slip, and reveal the tender and vulnerable person underneath, Ali truly shines. We watch Betty open up, letting someone in, but you can see that she’s also scared she’s going to be hurt.

This episode once again, raised the bar of what we can expect each week, sadly there are only two episodes left in the season (and I hear episode 6 gives a cliff hanger – ARGHHH!), and gave us some great moments.

I love seeing Betty, Kate and Gladys just chatting together. You can see the bond of friendship growing, watching them banter, and just be in their moments. I adore when Kate and Betty have a quiet scene to themselves, I love their relationship. And Gladys drunk… priceless…

Over the past 4 weeks, I have become very attached to these characters, and the opportunity we’ve had to chat with some of the wonderful cast has only heightened that.

I do hope they get a second season (and Sue and I get a chance to visit with all of them onset! – Hey! I can dream!) and we get to see more of their stories, because honestly, 6 episodes of this great Canadian series will not be enough!

Bomb Girls airs Wednesday at 8 on Global, or you can catch up online on the Global website.