Rex and the rest of the ageing clones (all Dee Bradley Baker) fight alongside the Ghost crew as the Imperials track them down in Relics of the Old Republic.

Written by Steven Melching, this episode first debuted on on 21 October, 2015.

Ezra (Taylor Gray), Kanan (Freddie Prinze jr.), Zeb (Steve Blum) and Sabine (Tiya Sircar) all find themselves developing friendships with the clones, even as Agent Kallus (David Oyelowo) finds them and leads an assault against them.

This may be the moment that spurs the Republic clones to join up with the rebellion and take the fight to the Empire. We get to see a ground assault attack on the clones, which mean AT-ATs, and it’s fun to see them in the series and how our heroes deal with them.

We also get introduced to a new inquisitor in the form of the Fifth Brother (Philip Anthony-Rodriguez).

The episode ends with a reunion between Rex and Ahsoka (Ashley Eckstein) who haven’t seen each other since the Clone Wars, fifteen years earlier. The story also allows Kanan to get over his mistrust of the clones. His lack of trust is understandable considering Order 66.

It’s a story filled with great moments and allows Kanan to continue his instruction of Ezra in the ways of the Force. Especially as they avoid the Imperial walkers in a sand storm in a well crafted sequence.

I love the music, Kevin Kiner makes great use of familiar John Williams cues, and the stories and the characters are working brilliantly withing the context of the Star Wars Universe.

Always Two There Are was written by Kevin Hopps and first debuted on 28 October, 2015. Ezra, Sabine, Zeb and their droid Chopper head to an abandoned Republic medical station for potential supplies.

It leads them right into a confrontation between them, the Fifth Brother and Seventh Sister (Sarah Michelle Gellar). One that Ezra and the rest may not be ready for.

Meanwhile, Ezra is caught between Kanan and Rex over his training. Both of them have valid points, but neither wants to listen to the other, so Ezra elects to go with Zeb and Sabine to get away from them.

And it’s a good thing too, as they learn the danger of the new Inquisitors. Ezra faces off against each of them, in troubling encounters. And they reveal that the Imperials aren’t only hunting the rebels, they are focused on finding he and Kanan.

Sabine gets to blow stuff up, and it’s always nice to see the repartee between Ezra and Zeb. It also shows that they have all really learned to work together as callbacks to previous events allow the characters a shorthand to interact with one another. And while the episode isn’t quite as strong as the previous one, it’s still a solid tale, and moves our characters forward in their battle against the Empire, and their individual character arcs.

Brothers of the Broken Horn was written by Bill Wolkoff and first aired on 4 November, 2015. Ezra needs some time away from his training, bouncing between Rex and Kanan (still) and wonders if he wants to be a jedi or a soldier, so he and Chopper take a mission to investigate a distress call.

The distress call is coming from Vizago’s (Keith Szarabajka) ship, but Ezra is shocked to find it mostly deserted but for Hondo Ohnaka (Jim Cummings), last seen way back in the Clone Wars. Hondo remains a con artist and pirate, and attempts to persuade Ezra to join him even as they attempt to outmaneuver and outrun an Imperial cruiser, and get themselves into and out of more trouble after that.

This is definitely a lighter episode, and as fun as it is to see Hondo back in the Star Wars Universe, it’s not the best use of his character. I mean he’s behaviour is on point, but I think it would have served him better to be used in a different way. He hasn’t changed at all since the last time he appeared.

It makes for some funny moments, but with all the other things the series is doing, like developing the conflict between Rex and Kanan over Ezra’s training, the new Inquisitors, the new expanded world the characters find themselves in since officially joining the rebellion, this one, while good, feels like a letdown.

The battle continues next week in a galaxy far, far away as I explore more of Star Wars: Rebels. 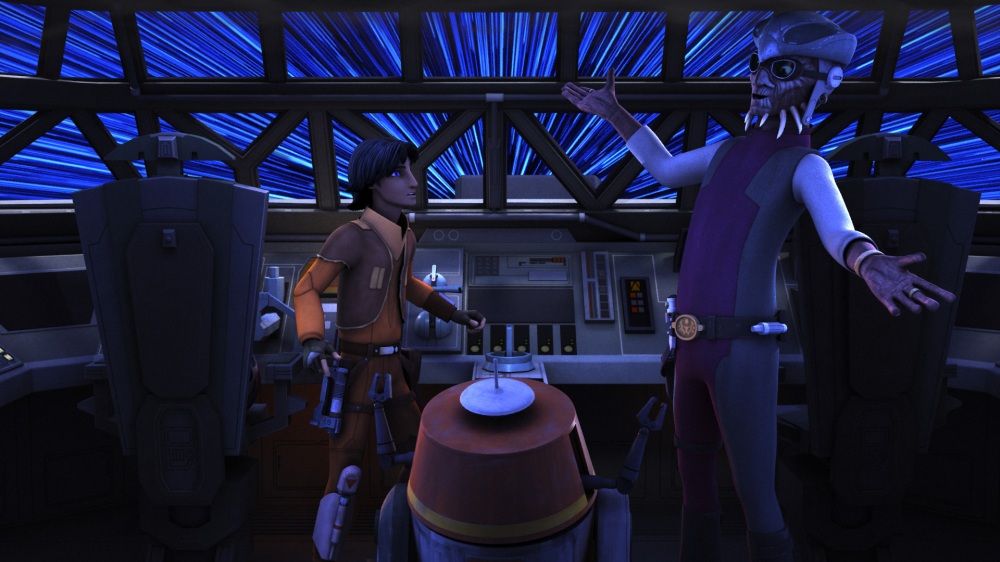