Manny Coto helps pen this episode alongside Judith and Garfield Reeve-Stevens in this episode that first debuted on 4 February, 2005. The story continues the arc started last week with the strange hologram-projecting ship the Romulans have created to stir up war between the Andorians and the Tellarites.

Archer (Scott Bakula) works to get the Vulcans, Humans, Andorians and Tellarites all on the same side as he tries to find a way to stop and trap the ship.

Things are going to get more complicated when the Rigellians are attacked by the Romulan ship, projecting the appearance of the Enterprise; Shran (Jeffrey Combs) and Talas (Molly Brink) are still aboard, and her condition is growing worse.

What we see in this episode, as Archer works to unite these species in an effort to start a war is the beginning of the Federation, something Archer was told he was going to be involved with. Course that may not go as smoothly as anyone would like when Talas dies and Shran demands justice through combat… and Archer fights for the Tellarites.

Aboard the drone ship Reed and Trip try to find a way to stop the ship, but its self-repair and Romulan control seems to constantly out maneuver them.

The Enterprise is able to rescue Trip and Reed, and Archer is able to at least get a preliminary peace in place, as the journey to Babel continues with a massive united fleet, but the reveal at the end of the episode shows us that the pilot of the drone looks very much like a pale Andorian… 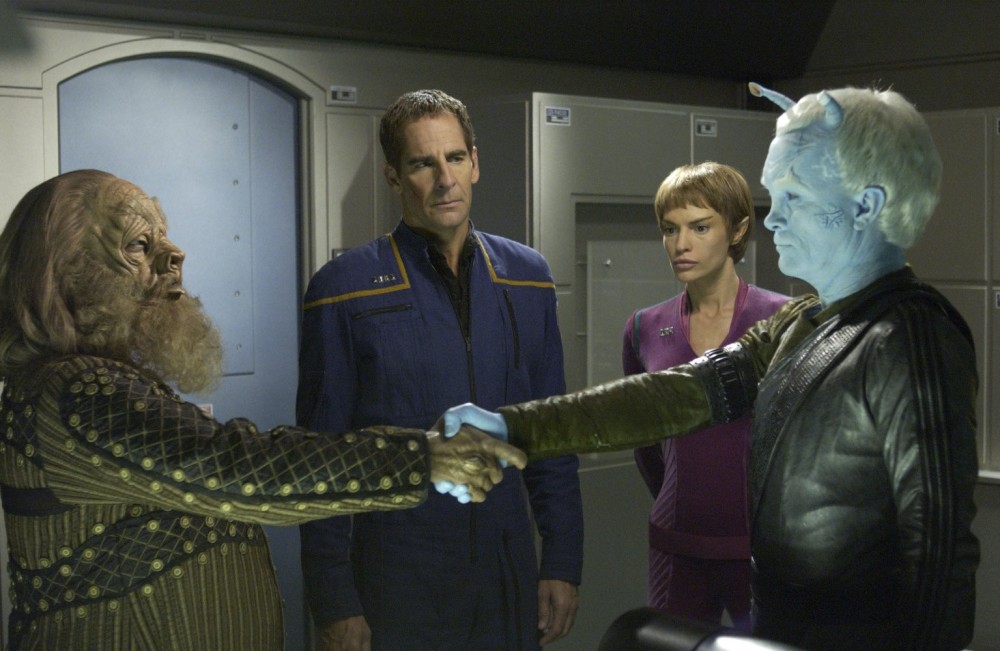 Andre Bormanis pens the final story in this three episode arc that first debuted on 11 February, 2005.

They learn that the drone pilot is an Aenar, a subspecies of the Andorian people, and Archer travels to Andor/Andoria (marking the first time it has appeared on screen in a Trek series) in an attempt to discover a connection between the Romulans and the Aenar.

Trip and T’Pol (Jolene Blalock) continue to dance around their feelings for one another which leads to Trip asking for a transfer off the ship.

On Romulus the wonderful Brian Thompson menaces as Admiral Valdore, and he’s a character actor I always delight in seeing.

Archer and Shran return to the Enterprise with some help in the form of an Aenar named Jhamel (Alexandra Lyon) , the sister of Gareb (Scott Rinker) who was captured by the Romulans and his telepathic abilities put to use to pilot the drone attackers.

It’s a little sad that the stories are getting better, but at this point the series was already announced as being cancelled. The series really excels this season, and it has some of the best writing featured in the show’s run. It’s too bad that it was cut short.

The Human Adventure continues next week as I journey onward through the fourth and final season of my exploration of Star Trek: Enterprise – The Complete Series on blu-ray, now available from Paramount Canada.