“What is lost is often found.”

The final episodes of season six begin, and the season itself comes to a conclusion this week, as I continue my exploration of The Clone War. The final episodes of the season work very hard to tie the series in as completely with The Prequel Trilogy as they can, answering some questions, and tying up story threads from the films.

The Lost One was written by Christian Taylor and like the rest of the season dropped on 7 March, 2014.

A Jedi mission discovers the lightsaber of the long lost Sifo-Dyas, the jedi master who commissioned the clones to be created on Kamino. Intrigued and troubled, Yoda (Tom Kane), Obi-Wan Kenobi (James Arnold Taylor) and Anakin Skywalker (Matt Lanter) investigate.

The story ties in directly to references made in both The Phantom Menace and Attack of the Clones (not that the whole series doesn’t tie in with them). As they investigate they find Dyas’ file locked out and sealed by the Galactic Senate and Chancellor Palpatine (Tim Curry), though he says they were sealed by Valorum (Ian Ruskin).

Once again, the jedi get close to discovering what is really going on, but Palpatine, and the Dark Side are able to stay ahead of the Republic.

None of the leads bring resolution, but only seem to raise more questions for our heroes. But it’s enough for Darth Sidious to send Count Dooku (Corey Burton) to stop the jedi, leading to a confrontation and duel between Anakin, Kenobi, and Dooku – meaning they have confronted one another before their battle in Revenge of the Sith. They also learn that Dooku is Darth Tyrannus, finally.

Finally, we encounter the troubling Pyke Syndicate. The only alien species in the Star Wars universe to unnerve me a little.

“Madness can sometimes be the path to truth.”

The story continues, as the ties between the Prequel Trilogy and The Clone Wars as Yoda’s meditations bring him into contact with a dead jedi, Qui-Gon Jinn (Liam Neeson).

He is seeking answers about Sifo-Dyas and his connection to the creation of the clones, but his encounter with Jinn throws him, because, to that point, it was believed impossible, or at least he thought it was.

Yoda seeks out answers, even as the Council worries about his health, and his abilities. The elderly jedi begins to doubt his own abilities, but medical exams, and suspicions of Sith involvement cause problems for him and the council.

A treatment is suggested that would allow Yoda to discover the source of the voice, a deprivation chamber, and he is stunned when he learns the truth, and Jinn advises he travel to Dagobah and complete what Qui-Gon could not. There he will be given one last important lesson in the Force, and one that will guide him across the galaxy.

Will he be able to get away from Coruscant while the Council is concerned for his health, and is intent on keeping him safe until they can understand what is wrong with him?

“Death is just the beginning.”

Yoda’s journey with the Force seems to be just beginning as it guides him to the heart of the galaxy. It is there that he will learn how to become a Force ghost when he passes on.

Here on a planet that reminds me of a Star Wars version of Avatar’s Pandora, Yoda gives himself over to learn how to reach back to the living after his physical death. Guiding him are a strange set of beings who remind me of the spirit in the anime, Spirited Away.

And to succeed in his learning he will have to face his own dark side, and confront how powerful he may become if he turned to the Dark Side of the Force.

As he confronts the Dark Side not only in himself but in the world around him which does its best to corrupt and confuse him. Succeeding, however, he is placed with one last task, one final mission.

Which will give us one final episode of the season (and then there was a six year wait until the series came to its conclusion).

Yoda must travel to the ancient Sith world of Moraband.

“Facing all that you fear will free you from yourself.”

Final temptations are delivered to Yoda as he travels to Moraband, and Dooku, and Palpatine become aware of it through a disturbance in the Force. And consequently, Yoda is almost granted a look at who the real threat is, or is it all an illusion?

As the episode, and at that point the series, raced to a conclusion, the episode tied up a lot of threads, revealing that Yoda was aware that they may not win the Clone Wars, but knew that there as a new hope, and there was another Skywalker.

It’s a great way to end the series, but happily there were given another season, this year! One that would help wrap up the series, as well as see the return of some familiar characters, and setting up future arcs for them. We’ll see how that plays out next week, when I begin the seventh and final season of The Clone Wars. May the Force be with you… 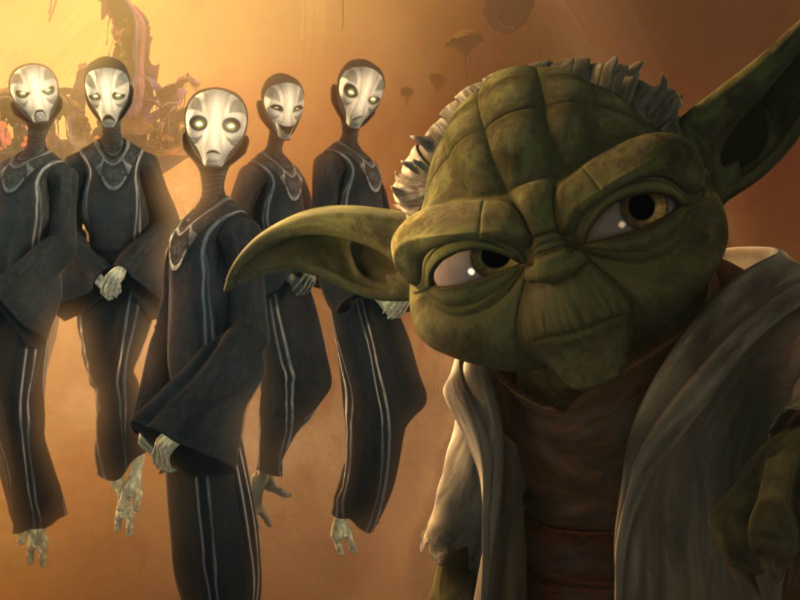