The camp, sadly comes from the reappearance halfway through Bond’s adventure of Sheriff Pepper (Clifton James), who despite being a racist (despite claiming to be a democrat) , is on vacation with his wife in Thailand – long enough to get caught up in a car chase as Bond chases the villain of the piece, Scaramanga (Christoper Lee, Ian Fleming’s cousin).

This time out, Bond is attempting to hunt down Scaramanga, one of the greatest assassins in the world, who always shoots with a golden bullet, and uses a gun that can be disassembled into items that most gentleman would carry on them. It’s over the top, not quite so big as Moore’s next effort, The Spy Who Loved Me, but on its way. 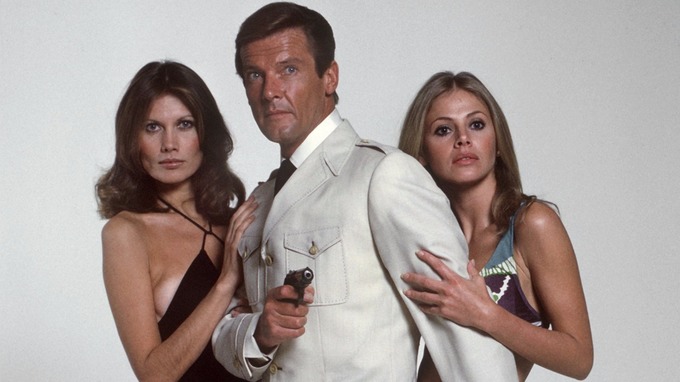 Maud Adams (not to be confused with her later appearance as the female lead in Octopussy) plays Scaramanga’s woman, Andrea Anders, who he takes pleasure from before a kill, just like the theme song, sung by Lulu, will tell you. He lives on a remote island in Chinese waters,  filled with a funhouse that serves as hunting practice (including a wax musuem dummy of Bond)when his assistant, Nick-Nack (Herve Villechaize) contracts hitmen to take out his boss.

‘Helping’ Bond is local agent, Goodnight (Britt Ekland), arguably the worst written female character in a Bond film ever. Together, they are working to bring down Scaramanga, who has also grabbed a MacGuffin in the form of a solex, a solar converter that can be weaponized and Scaramanga plans to sell to the highest bidder.

So not only is Bond out to put a stop to Scaramanga before 007 ends up with a golden bullet through the head, and save the world.

There are some fun sequences, a brief look inside Q’s (Desmond Llewelyn) lab, a bit of a silly Karate fight that showcases a couple of schoolgirls, a record setting car jump, and a funhouse chase.

Still, not Moore’s, or the series’, best work. It certainly didn’t hint at the success the next film would bring. I do like the fact that there aren’t a lot of gadgets in this film, and that Bond’s body count is actually very low, he kills all of one person. Of course his treatment of Goodnight is rather murderous, and she seems quite happy to take it.

There are changes coming Mr. Bond… 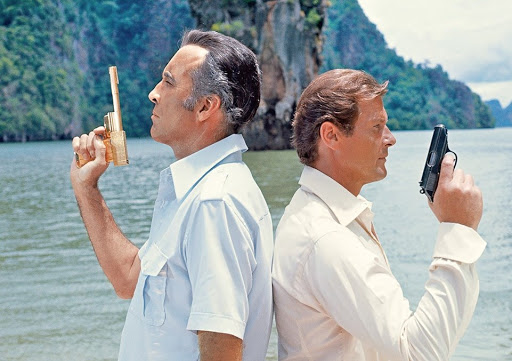