When Archer’s beagle, Porthos, picks up a virus on an alien planet, the poor pup, and his captain, spend the night in sickbay, tended to by Phlox. Archer worries over his dog, but also gains a deeper understanding of himself and his alien doctor.

It also shows how much we love our pets.

And we get continuity by having the Enterprise have another encounter with aliens that they offended last season, and who are equally offended this time, when Porthos urinates on one of their sacred trees.

With a diplomatic incident in the offing, and the need for supplies the aliens have, Archer has to balance the concerns for Porthos, with his duties as captain. It’s going to be a long night.

Especially since Phlox doesn’t need sleep, and sickbay isn’t as quiet as you would think.  Through the course of the night Phlox states that he believes there is sexual tension between the captain and T’Pol (Jolene Blalock) and the captain has a dream sequence catering to that idea.

I’m not gonna say it feels forced, but I don’t think it necessarily works. I do like that we get a look at Archer dealing with the possible loss of Porthos, it feels very familiar to many viewers. You know you have to deal with everything else, but everything comes down to our furred friends, and what we do for them. 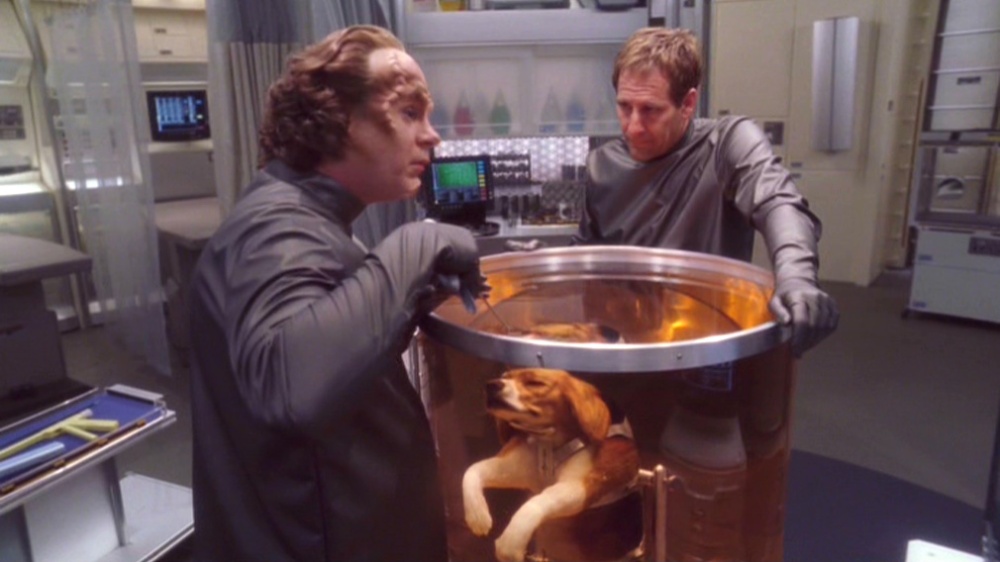 David Wilcox pens the teleplay for this episode from a story by Berman and Braga. It debuted on 30 October, 2002, and sees the Enterprise crew encounter the Klingons again.

It seems a group of Klingons are terrorising a deuterium mining colony, controlling them, and keeping the mined element for themselves. Archer and his crew discover what is going on, and he, T’Pol, Trip (Connor Trinneer) and Reed (Dominic Keating) train the miners to look out for themselves.

Does this sound pretty familiar? It should, it’s the plot of The Seven Samurai and The Magnificent Seven. And this time, Archer and his crew are the heroes of the picture, and the Klingons are the baddies. Each of the featured crew get their action beat and moments, and it’s a fun diversion of an episode, but isn’t as strong as some of the other episodes that have graced the series so far.

It’s not a horrible episode, but it is fairly standard with a well-worn plot, and the action beats when they happen could have been stronger.

The Human Adventure continues Thursday when I explore more of season two of Star Trek: Enterprise – The Complete Series. Now available on blu-ray from Paramount Canada.