John Shiban pens this episode that first debuted on 2 October, 2002. The Enterprise triggers a cloaked mine, planted by Romulans, and it’s up to Reed (Dominic Keating) to work another one free of the hull plating.

The explosion causes a number of injuries, and it all seems a bit of a shock to everybody, as they recover, and try to navigate the ship free of that region of space.

This is our first look at the Romulans in this series, but keeping with established Trek continuity, the Enterprise crew never actually see one, something that isn’t done in-universe until The Balance of Terror in The Original Series. The Romulan bird of prey also looks very much in keeping with those we see in TOS.

In a bit of fun in-ship continuity, we see that Captain Archer (Scott Bakula) likes to have breakfast with some of his officers, on a regular basis, and this time around it’s Reed’s turn, who is understandably anxious.

And it’s Archer who goes out to help Reed with the mine, when it attaches itself to the ship more securely, through the armoury officer’s leg. The pair need to come up with a plan, one that connects with Trip’s (Connor Trinneer) idea to release that piece of hull plating.

Reed still has a practical attitude, and doesn’t quite understand his captain. He feels that there should be structure to the chain of command. It’s an interesting point of view, and it keeps Reed disconnected from a lot of his fellows, except for Trip – do you sense a character arc coming?

Roxann Dawson directs this episode that is a bit of a follow-up to the prior episode. Mike Sussman and Phyllis Strong pen this story that first aired on 9 October, 2002. Phlox (John Billingsley) works to heal Reed’s injured leg, and recovers fairly quickly.

The Enterprise isn’t so lucky.

Trip and the engineering team is still trying to repair the damage caused by the Romulan mine which would take months if they could reach Jupiter station (which would take a decade) when it comes across an automated repair station. As things are fixed and tended to, everything seems a little too good to be true.

And, of course, it is, though it isn’t aided by the fact that Trip and Reed go snooping around the station. The point is driven home when Mayweather (Anthony Montgomery) is discovered, apparently dead. The reveal of how the station works, and the true cost of repairs is pretty cool, and adds a bit of darkness to what started out as just a mysterious story.

The station has something that will become a regular instalment in Trek, though Archer and company have their first encounter with it, a replicator. And there is other technology that the crew find interesting, and, honestly, would like to get their hands on. But the station has set parameters and programming.

The Human Adventure continues next week as I explore more of season two of Star Trek: Enterprise – The Complete Series on blu-ray from Paramount Canada. 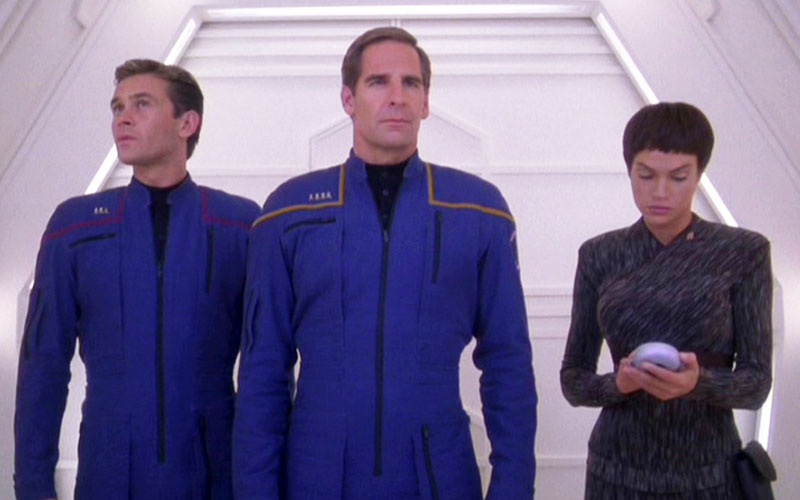