Chakotay (Robert Beltran) gets the chance to take the centre stage in this episode written by Micheal Taylor from a story concocted by Taylor and Micheal Sussman, that first aired on 17 January, 2001.

Following an accident, Chakotay seems to be able to travel through temporal distortions that are plaguing the Voyager, and he has to seek the help of the crew at different points in time, but is hindered by Chaotica (Martin Rayner) and Seska (Martha Hackett).

He is joined by Janeway (Kate Mulgrew) from before the Voyager was lost in the Delta Quadrant, and gets assistance from future and past versions of the crew. It’s a fun episode, a puzzle for the First Officer to put back together.

There are some great moments of drama and humour as the episode reviews events that have happened through the course of the series, and Janeway’s impression of what that means for her command.

It also gives the series a chance to do a bit of a greatest hits episode without making it a clip show, but instead gives the viewer something fun, new, and honouring what has gone before.

It also causes Janeway to wonder if she’s made the right decisions about what she’s done, and if she should change her past to remove the future that causes them to be stranded in the Delta Quadrant.But Chakotay, breaking the Temporal Prime Directive tells her about the impact she’s had on people, crew, friends and that it’s not all bad.

And it’s true, the journey isn’t bad at all. The ship is temporally realigned, and resumes the journey home. 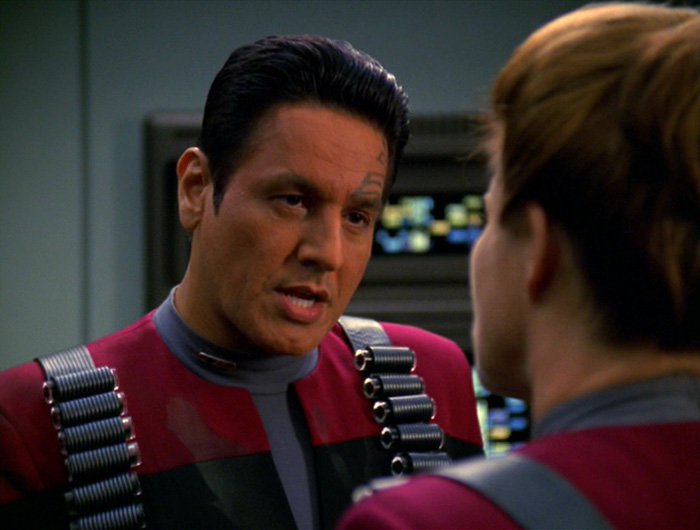 Torres begins to worry and shares some private fears from her youth, when she learns that she’s pregnant.

I like the relationship that has grown between Paris (Robert Duncan McNeill) and Torres, although I think they rushed through the proposal and wedding, that should have been drawn out over at least two episodes.

The episode shows the growth of their relationship, the family nature of the starship, and more importantly gives Torres a moment to shine. She was always a favourite character of mine, and I like her episodes.

It also lets Paris have a few moments as he seeks out advice on fatherhood.

I really dug this episode, and loved how it layered out B’Elanna with fears that countless children have growing up, and no doubt new parents have as well. There’s some nice work on all parts here, and debate on names, and a worthy nomination for godfather.

The Human Adventure continues next week with more episodes from the final season of Star Trek: Voyager as I explore The Complete Series on DVD from Paramount Canada.