The station’s Vic Fontaine (James Darren) is one of the most popular holosuite programs, but a glitch has caused mobsters to take over Vic’s nightclub, and the station crew are going to have to form their own gang to go in and take the club back.

Leading the charge is Bashir (Alexander Siddig) and O’Brien (Colm Meaney), and the rest join in out of loyalty to their holographic friend, which is a nice commentary on friendship, because, as Worf (Micheal Dorn) points out, Vic is just a holodeck character.

But most of the crew sign up to help out including Dax (Nicole de Boer), Odo (Rene Auberjonois), Kassidy (Penny Johnson Jerald), Kira (Nana Visitor) and Nog (Aron Eisenberg). They come up with a plan to get the head mobster, Frankie Eyes (Robert Miano) in trouble with his boss, by pulling off a heist – it’s Deep Space Nine’s take on Ocean’s 11.

Eventually Sisko (Avery Brooks) finally gets roped into helping despite his justified reasoning for not going to or enjoying Vic’s and the plan comes together nicely, but plans never go off as they are planned.

Will the crew be able to help their holographic friend?

It’s a fun caper, that lets the crew do something fun and a little different, and the music by Jay Chattaway perfectly reflects that. It’s just a great little episode that shows that the cast and series can do different genres, and still be classic Trek.

Doctor Bashir is attending a medical conference on Romulus, and when Sloan (William Sadler) shows up, he finds himself embroiled in a scheme by Section 31 to make sure that the Romulans stay on the Federation’s side during the continuing Dominion conflict.

The guest cast is pretty exemplary this time around, including Hal Landon Jr., Barry Jenner, John Fleck and Adrienne Barbeau! Barbeau turns in a great turn as a Romulan.

This plays like a political spy thriller, and it’s a lot of fun to watch the smart story play out and Sloan isn’t above any trick to keep Bashir on the case. In fact, Sloan and Section 31 may be preparing to assassinate someone just to keep the Romulans on their side.

But when Bashir is grabbed by the Romulan Tal Shiar, everything is endangered. Great episode that shows how much Bashir has changed over the seasons, and the conclusion sets up how dark and how much a threat Section 31 continues to be.

The Human Adventure continues next week as the final season of Star Trek: Deep Space Nine blazes onward. The Complete Series on DVD is available now from Paramount Pictures. 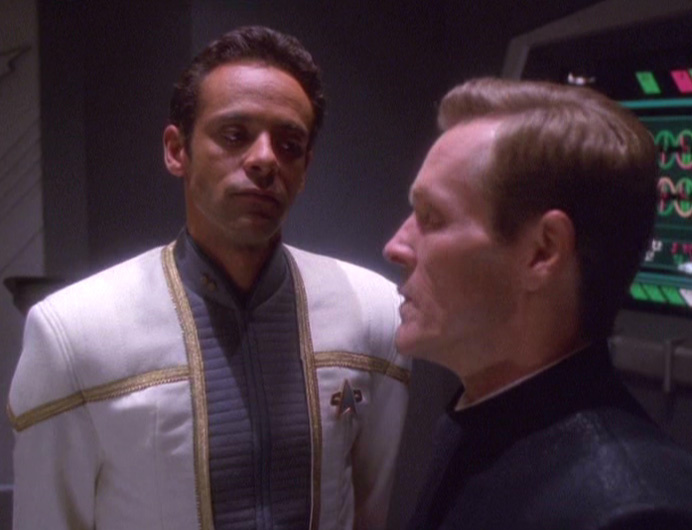