Captain Janeway (Kate Mulgrew) and her First Officer, Chakotay (Robert Beltran) have contracted an incurable disease, which forces the Voyager to leave them behind, with Tuvok (Tim Russ) in command to discover a cure.

They are left behind on a planet, which somehow nulls the effects of the disease, where their friendship grows, there’s a hint of something more developing between the two of them.

Back on the ship, the crew is upset and there is a debate on whether they should do something more. It goes so far that Harry (Garrett Wang) seems close to inciting a mutiny!

While the pair adapt to their new life, Janeway continues to seek a cure, and aboard ship, Tuvok wrestles with the trials of command, and trying to be a competent captain, which may mean stepping beyond the bonds of logic.

That may lead them to a dangerous encounter with the Vidiians, but also has a callback to the episode, Lifesigns when Danara Pel (Susan Diol) is aboard one of the Vidiian ships and delivers the cure to them.

This allows the crew to be reunited with its command team, and continue its journey home.

The events of this episode take place over the course of three months, and while it gives Janeway and Chakotay some nice moments, and no doubt inspired a number of shippers, I never really thought there was that kind of a connection between them, although the final moments of the episode hint that they both realize what they may have lost.

Micheal Piller pens the season two finale that debuted on 20 May, 1996.

Seska (Martha Hackett) contacts the Voyager to reveal that she’s given birth to Chakotay’s son. When a rescue attempt is planned, they fall prey to the Kazon-Nistrim in a sneak attack.

The Kazon seize the vessel!!

The first half of the episode is all about Chaoktay deciding whether or not to go after the child, and the plan that is developed to rescue the boy. But even with all the preparation, it seems Seska and the Kazon have accounted for all possibilities, and it seems nigh impossible for the Voyager, and its crew to not stumble into the trap.

But not all of the crew has been put off-ship and marooned, the Doctor (Robert Picardo) is still there, being a hologram, and so is Lon Suder (Brad Douriff) – last seen in The Meld, and we know how dangerous he can be.

With Janeway and the rest stuck on a hostile planet, it may be up to a hologram and a Betazoid sociopath, not to mention Paris (Robert Duncan McNeill) taking a shuttlecraft to try to reach the Talaxians, but we’ll have to wait to find out, as we are slapped with a To Be Continued and a roll of credits.

I really love the action beats in this episode, and love how everything plays out. It’s a tense, well-paced story, that sets up the payoff for the next episode.

Next week we start season three, and are given a resolution to the cliffhanger as I continue the homeward journey with Star Trek: Voyager The Complete Series on DVD, now available from Paramount Pictures. 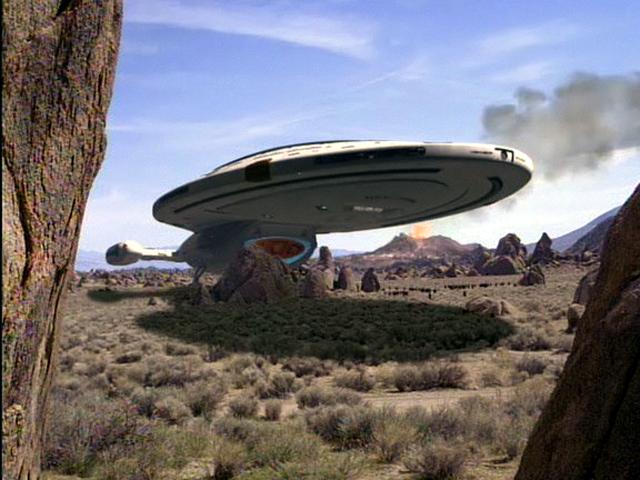