A joint Bajoran, Cardassian and Federation science mission to establish a permanent communications relay through the wormhole runs into problems when an ancient Bajoran prophecy centred around the Emissary – Sisko – and the wormhole comes into play.

As parts of the prophecy appear to come true, Kira (Nana Visitor) begins to wonder if there is something to it, but Sisko and Odo (Rene Auberjonois) believe that the prophecy is being interpreted for political benefit.

As the Cardassians come aboard the station, expectations and realisations in relating to one another come into play, and it speaks to the character development of the series to show how O’Brien (Colm Meaney) has grown considering how he felt about them when they were first introduced to the Trek verse in Next Generation.

And that growth in character causes a great moment with one of the Cardassians late in the episode.

Dax (Terry Farrell) tries to keep Sisko on task as the prophecy grows closer to reality, but events seem to be piling up in favour of the mystical. But what if everyone has misinterpreted the prophecy?

This ends up being a fun, and entertaining episode. I continue to enjoy the growth of the characters, and the way the universe develops. The series proves itself as true Trek on a fairly regular basis, and this one definitely does that. 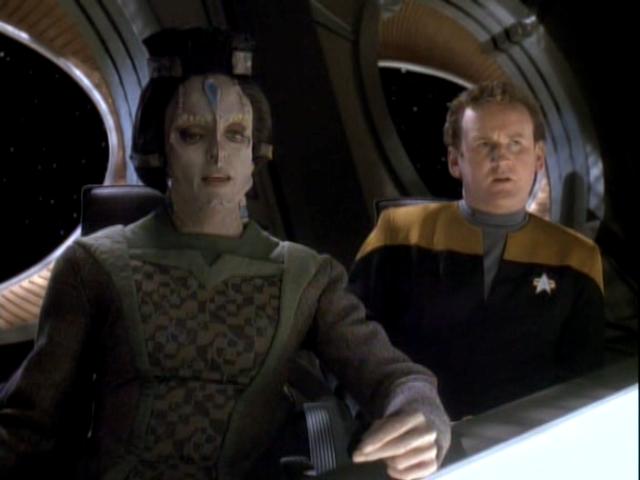 Rene Auberjonois directs this episode that was written by Ira Steven Behr and Robert Hewitt Wolfe, from material by William N. Stape, and first aired on 20 February, 1995.

Zek (Wallace Shawn) the Ferengi Grand Nagus, is acting in a bizarre way, even going so far as to rewriting the sacred Rules of Acquisition. Quark (Armin Shimerman) is determined to figure out what is going on, and getting Zek back to ‘normal.’

The b-story follows Bashir (Alexander Siddig) trying to deal with the fact that he’s the youngest doctor to be nominated for a scientific award, one that is usually bestowed at the end of a career.

As Quark investigates, he discovers that something went wrong with Zek when he passed through the wormhole, he encountered the corporeal aliens within it, and Quark encounters them as well when he works to restore Zek.

It’s a funny, light-hearted episode that shows the aliens in the wormhole in a slightly different way, and lets Quark have a lot of fun throughout. Not to mention that sometimes his brother Rom (Max Grodenchik) is sometimes more devious than Quark gives him credit for.

The Human Adventure continues next week with more episodes from Star Trek: Deep Space Nine – The Complete Series on DVD from Paramount Pictures.