Miles O’Brien (Colm Meaney), Sisko (Avery Brooks) and his son Jake (Cirroc Lofton) really step in it in this episode by Mike Krohn. First airing on 7 November, 1994 the episode features a station in lockdown.

The lockdown occurs when the trio, who are in one of the ore processing units that the Cardassian’s ran with Bajoran slave labour, trigger a security system that believes the Cardassians are still in charge of the station, and that the prisoners are attempting a revolt.

With the automated system citing constant warnings, thanks to recordings of Gul Dukat (Marc Alimo) the entire station is in constant danger, and no one can get into the system without Cardassian passcodes.

Dukat may not be there, but there is a Cardassian on the station, Garak (Andrew Robinson).

When Dukat does arrive, there are a number of troubling moments for all the characters, and a horrifying revelation that Dukat has intentions towards Kira.

Jonathan Frakes directs this lacklustre episode from Mark Geherd-O’Connell from a story by Hilary J. Bader and Evan Carlos Somers.

The Dax story plays like an interplanetary version of Brigadoon as she falls in love with a resident of a planet that shifts between this reality and one of pure energy, and returns only once every sixty years.

While it’s a fun Dax story, it just doesn’t capture and entertain as much as some of the other episodes that have preceded have done.

It did allow Frakes to continue refining his craft and when I see his name on an episode, or a movie, I’m usually willing to bet I’ll be entertained.

Of course, Jadzia won’t stay on the planet (no matter how close it gets to her leaving DS9 and the Defiant), she has a career, and the show must go on. Still, it’s nice to have a bit of a gentle episode, even if it isn’t as well-written and executed as it could have been.

Just a small bump in the season, but the Human Adventure continues next Tuesday when I continue to explore Star Trek: Deep Space Nine – The Complete Series on DVD from Paramount Pictures. 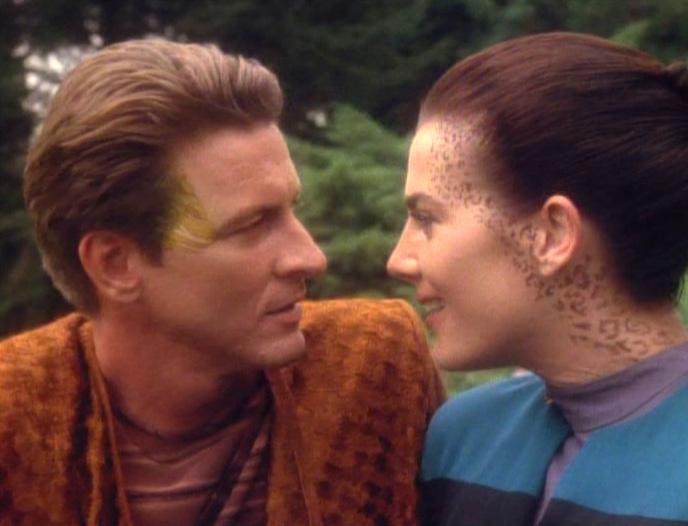