Following the series premiere the first episode following the opener was as edgy and dark (while being as colourful, vibrant and music-filled as Brother’s Keeper). Heart of Darkness (not quite dissimilar to Joseph Conrad’s original story) was written by A.J. Edison, and first aired on 28 September, 1984.

Crockett and Tubbs are immersed in a world that they are struggling to stop, but if Lawson, going by the name Artie Rollins reveals who they really are to a pornographer king, Sam Kovics (Paul Hecht), that could ruin everything.

What side will Lawson come down on, and what will it cost Crockett and Tubbs? And what about the fact that Artie has asked to be brought in, and ignored by the Bureau? What side of the line is Artie on? And how is it going to play out when lives are on the line?

This is also the first episode that ends on a freeze frame that’s supposed to leave you numb from the revelation that ends the episode.

The music includes tunes from The Tubes, John Waite’s Missing You, Devo, and George Benson.

Cool Runnin’ aired on 5 October, 1984, and was written by Joel Surnow. Crockett and Tubbs are tracking a trio of murderous, drug-dealing Jamaicans.

Unfortunately, they may need help. And so we are introduced to another semi-recurring character The Noogman, Nugart Neville Lamont (Charlie Barnett).

It’s not necessarily a lighter episode, especially considering the way it opens, but there is some humour at work in this episode with the introduction of Noogman. The episode continues to show an underbelly to the glamorous look of Miami, as well as some of its seedier side.

There is continued fallout in Sonny’s personal life as his romance with Gina hits a couple of bumps when his estranged wife, Caroline (Belinda Montgomery) hits him divorce papers, and sues for custody of their son.

In addition, the drama is upped when a pair of fellow officers are hit by the Jamaicans. As things unfold, Noogie finds himself in trouble with the Jamaicans and Sonny and Rico risk their lives to save the informant when everything looks like it’s going to go sideways.

This episode includes the classic Bob Marley track, Jamming and shows that as a cop series the show will be able to tell all manner of stories.

Next week, we dive into a two-parter when the two cops confront Calderone’s Return. 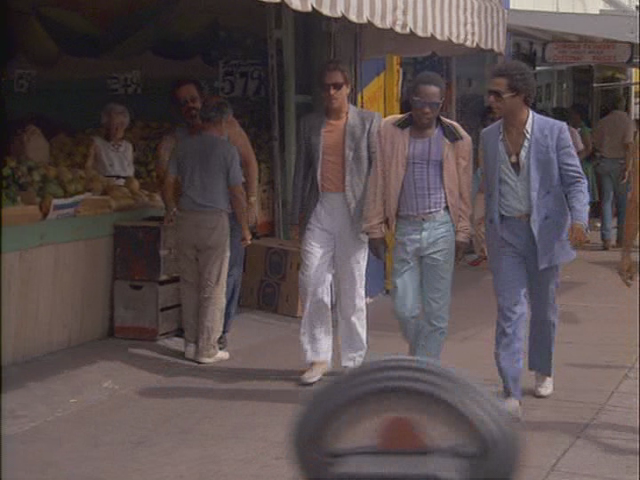