Aquiel, this first episode up this week is a bit of a mixed bag. Written by Brannon Braga and Ronald D. Moore from a story by Jeri Taylor, this one debuted on 30 January, 1993.

Geordi (LeVar Burton) is the star of this episode which sees the Enterprise arriving at a subspace relay station. Operated by a two person crew on a year long assignment, the starship arrives to what may be a murder scene.

Geordi investigates, digging into the station and personal logs of one Aquiel Uhnari (Renee Jones). Through the course of the episode, and his investigation, he begins to fall for her, even as he learns of her spotty service record.

When the Klingons show up at the station, Picard (Patrick Stewart) confronts them about one of their own who has been harassing the station, but there may be more going on here than anyone can figure out.

All of this is going on while Aqueil, who was taken by the Klingons, begins a relationship with Geordi. Which may not be the best thing because she’s the prime suspect in the murder.

But as Dr. Crusher (Gates McFadden) conducts her own investigation on some of the residual remains from the station, she discovers something even stranger, which may lead to a stunning conclusion for Geordi and the rest.

It’s nice to see Geordi taking centre stage, as well as having a relationship, but the story itself could have been a bit stronger. The story wraps up quickly and it all comes together rather haphazardly, but it’s definitely fun for Burton to have his own episode for a change.

Naren Shankar pens the teleplay from a story by Rene Echevarria that moves Troi (Marina Sirtis) into the limelight in this solid episode that first aired on 6 February, 1993.

Troi wakes up to find herself remade into a Romulan. It’s revealed that she was kidnapped by Subcommander N’vek (Scott MacDonald) so that she could assume the role of Major Raqal of the Tal Shiar – a powerful agency within the Romulan Star Empire.

She is aboard a Romulan starship commanded by Toreth (Carolyn Seymour) and finds herself a link in an rescue attempt to get Romulan dissidents out of the Star Empire.

Spock’s name is mentioned, though Leonard Nimoy doesn’t make an appearance. Even the mention of his continued work on Romulus, however, adds a depth and layer to the show, and this one plays as a very entertaining political thriller.

It’s also nice to see Sirtis in the limelight, in a script that actually works for her. If they could only do the same for Gates McFadden.

The story is filled with defectors, agents, mistrust, and dangerous consequences, all of it proving to be very enjoyable.

The episode also debuts a new hairstyle for Worf (Micheal Dorn) he’s got himself a bit of a ponytail now, that will stay with the character for the rest of his run. 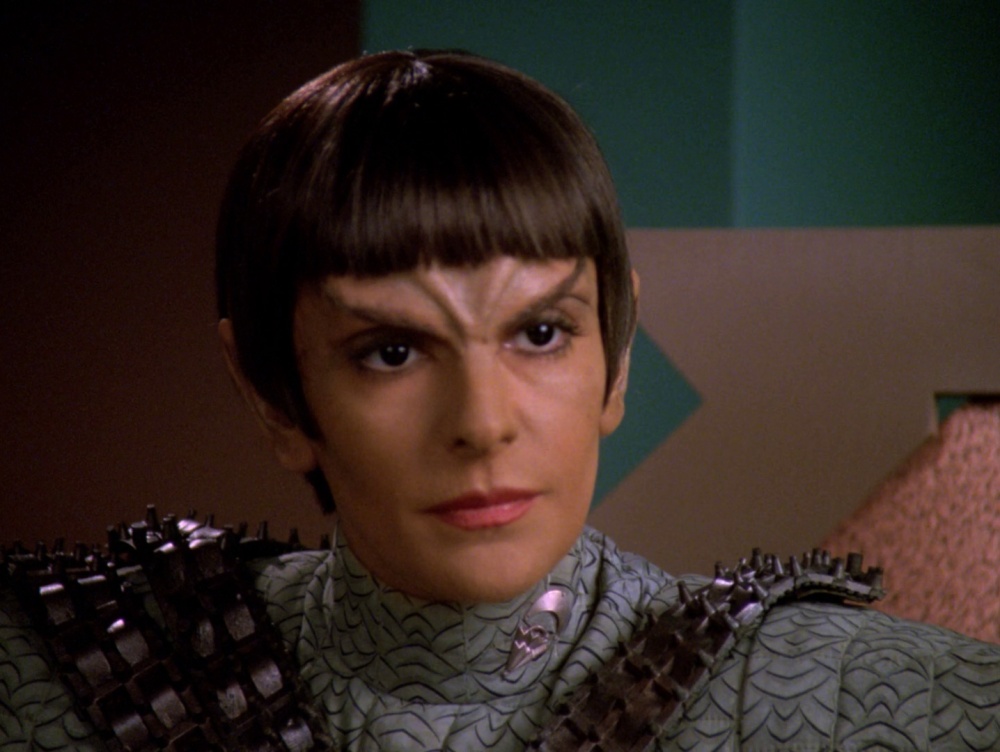