Having just recently rewatched the film version of Philip Pullman’s The Golden Compass, I was eager to revisit the novel, which I had read only once about twenty years ago. I remember enjoying the series, but can’t remember anything that happened in the third book of the trilogy, only recalling that I cried a lot.

So I dug into book one of His Dark Materials, The Golden Compass, and buckled up for an adventure in a parallel world with Lyra Belacqua, the ever-changing physical manifestation of her soul, a daemon named Pantalaimon, a giant polar bear named Iorek Byrninson, and a cadre of witches and other characters.

This world is overseen by a theocracy known as the Magisterium, or the Church, and they have plans within plans, that involve Lyra, a strange and intimidating man known as Lord Asriel, and a beautiful and powerful woman known as Mrs. Coulter.

With children disappearing everywhere, Lyra finds herself journeying north to rescue one of her kidnapped friends and finds a truly terrible experiment going on, and even as she does what she thinks is right, she is being maneuvered into a dangerous position.

With Pan, and a golden compass, a truth-telling device known as an alethiometer at her side, she finds that there is more going on than she realised, and that the forces around her may be truly evil. 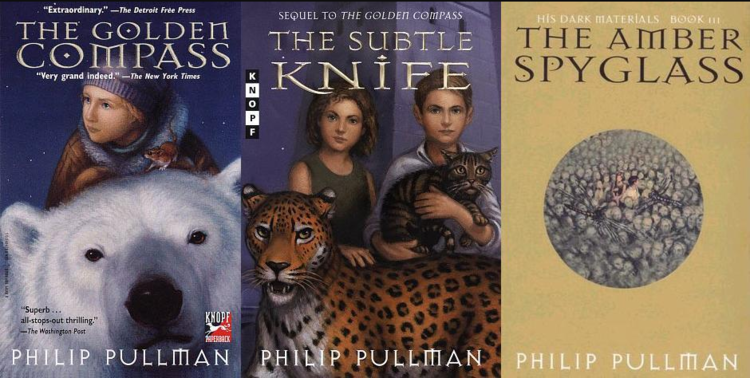 Everything is connected to something known as Dust, which is attracted to children when they go through puberty, and their daemons settle on one form. The church, and Coulter believe that it may be a physical manifestation of Original Sin, and use the bible to back up these beliefs, but Asriel believes something even more extreme, a heretical idea of parallel worlds all pressed together, that Dust may lead him to.

But at what cost?

Despite being positioned as a young adult book, this story deals with some heavy ideas, and has some very dark moments. There are revelations, villains, deaths, heroes, and turnabouts that leave Lyra’s head spinning, even as she focuses on her goals.

Pullman’s book is brilliant, engaging, still incredibly fun to read, and while I may have been an adult the first time I read it, I got even more from the story this time around, and am eager to see how the next two books in the series, The Subtle Knife, and The Amber Spyglass affect me.

And now, of course, there’s the first book in an all new trilogy on book shelves, The Book of Dust.

This book was a great ride, with involving characters, a slightly altered but still recognisable reality and a story that mystifies and enthrals even as it entertains.

I won’t be waiting too long before I start book two.