Our penultimate trip to the Twilight Zone gets underway this week, with The Encounter as I draw to the end of The Complete Series on blu-ray from Paramount Pictures.

Written by Martin Goldsmith, this episode first debuted on 1 May, 1964. It stars George Takei and Neville Brand.

After World War II, prejudices and hatred still ran high, and they are brought into focus when a Japanese gardener Arthur (Takei) meets Fenton (Brand). Following an offer of cutting Fenton’s grass, the two men share a drink together. But both are haunted by the events of the past, and neither is what they say they are.

There are secrets, reveals, and a Samurai sword all locked up in the attic with the two men as they confront the past, the hate, and the truth.

There’s no real reveal, or twist, it is just an exploration of the fallout of the war, the hatred, the racism, the regrets, the guilt, and the need to deal with the past if we ever plan to deal with the present or our future.

The extras include an isolated score, sponsor billboards, and a commentary by Takei, who is joined by the episode’s director Robert Butler, and Zone historian Marc Scott Zircee. 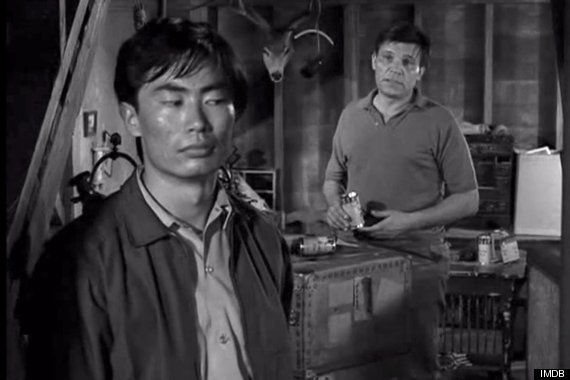 Mr. Garrity and the Graves was written for television by series creator Rod Serling, based on the short story by Mike Korologos. It first aired on 8 May, 1964.

Mr. Garrity (John Dehner) rides into the small western town of Happiness with a promise of a gift (or curse) – he offers to resurrect the town’s loved ones. But is that something the townspeople want?

It seems their Boot Hill is the largest in the area, and despite some misgivings about Garrity’s power, a demonstration seems to show that he is as good as his word. The people of Happiness filled with trepidation and excitement agree to his offer.

But is it all a con? Is it more? Garrity seems oblivious to his true power, and the ending, though predictable is fun, and must have been quite the spooky ghost story for the time.

The extras include billboards, a commentary by Ted Post, the episode’s director and Zircee. Also included is a radio version starring Chris McDonald. The Brain Centre at Whipple’s is the final story this week. Written by Serling, this episode first debuted on 15 May, 1964, and was directed by Richard Donner.

Mr. Whipple (Richard Deacon) is a heartless CEO who is getting rid of as many employees as he can, to replace them with automation. His workers object of course, but Whipple can’t be reasoned with.

Some men try to sabotage his efforts, and the computer that is taking over the system, but ‘progress’ seems unstoppable. But if something goes wrong with the system, who will be there to fix it? And will Whipple learn from his experience or become obsolete himself?

The story plays very much to the fear of the working man and the machination of American industry.

The extras or this episode include billboards, and a radio drama starring Stan Freberg.

Next week, we take our last foray into The Twilight Zone, with the final three episodes of the iconic series. But you can still check them all out on blu-ray today, thanks to Paramount Pictures The Twilight Zone: The Complete Series! So good!