Available now from DK Canada is this amazing companion piece to the new Star Wars film. Filled with hints, that are now canon, about characters, both new, like Supreme Leader Snoke, and old, like Luke Skywalker.

Leafing through the pages , I catch things that I didn’t see in the screening but ties in nicely with what has gone before, both on screen and in the new canon novels. They truly have created a tapestry that hangs together beautifully, each book, each film, each comic, adds to it and adds to one’s enjoyment of it.

The Visual Dictionary takes us through all the locations of the film, gives us names for any number of supporting characters as well as gorgeous photos of the items the characters, or ships are outfitted with, and a name for new species, like those pretty crystal foxes… commonly known in the Star Wars universe as a vulptex.

The images and the book are perfect for fans and cosplayers (though I guess those would be one and the same), letting us explore the tiniest items seen on screen and letting us know how it fits within the realm we so love.

Within these pages is an explanation of why BB-8 is so easily mistaken for a games machine in Canto Bight, and the fact that even if you missed it, Leia is still using the same blaster she used in A New Hope. 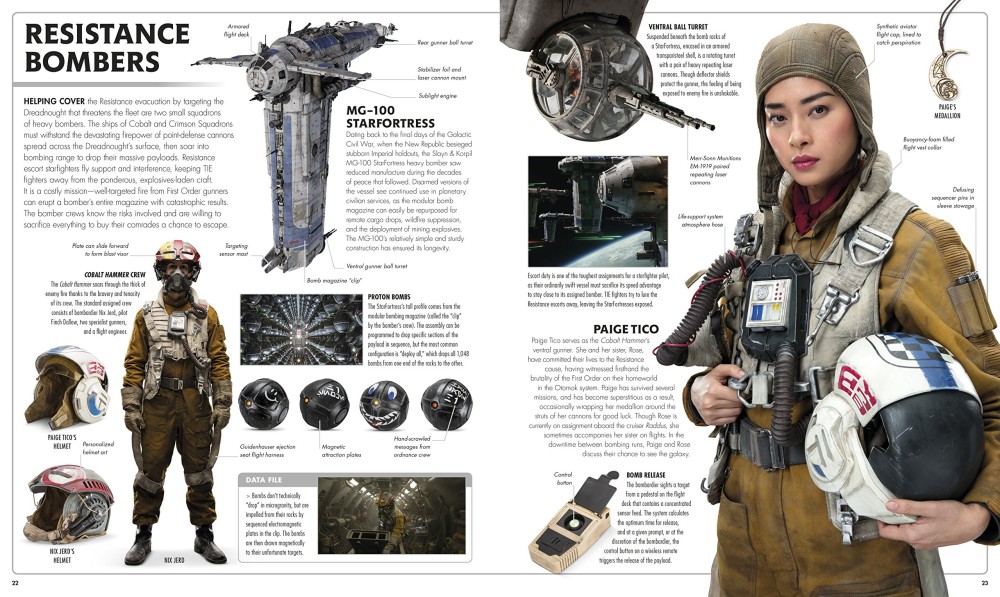 Filled with beautiful pictures highlighting the fantastic actors, along with their costumes, and props, the book keeps bringing me back to examine ‘just one more page’ over and over.

These images, these pages, will fire the imagination of fans young and old. I love leafing through them, discovering some little known fact about an item, or a character that will then change my next viewing of the film when I know how they fit into the grand scheme, as well as their personal history. It’s a real bonus that you get from these books. You now know where to look for all these little details. You learn something from the book, you see it in the next screening.

I like getting a look at Luke’s life on Ahch-To (and seeing a nice tie-in with canon novels), which, thanks to the galactic map at the front of the book, it’s easy to figure out where it is in relation to the rest of the galaxy, and the events of the film.

The Star Wars books from DK, alongside the films themselves have become something I look forward to, to devour, and pore over again and again. Just like I have done with the movies throughout the decades.

These books, from DK Canada, are beautiful, impressive and made for fans like me (and you), so grab one today, and may the Force be with you.