With an airdate of 4 February, 1991, this episode, written by Philip LaZebnik, from a story by LaZebnik, and William Douglas Lansford, has always been a fun one for me.

Picard (Patrick Stewart) and Data (Brent Spiner) find themselves in a mystery when they answer a call from a planet that says the bill has come due, their planet now belongs to their version of the devil, Ardra, and she has shown up to collect.

It seems one thousand years ago, a contract was signed, and now it’s time to pay up. The planet, the inhabitants, anything in orbit (including the Enterprise) becomes the sole property of Ardra.

When Picard encounters the being calling itself Ardra (Marta DuBois) he knows that she isn’t really the devil, but with her use of technology to simulate magic it’s hard to convince the rest of the planet.

Picard must prove to the planet that she is not really Ardra but a con artist. But Arda remains in control, entertaining the captain’s ideas, and invites a trial approach to prove her claim on the planet.

And Data is chosen to objectively arbitrate.

Picard has to present his case while the crew try to find a way to pull the curtain back, and reveal Ardra as the con artist they know her to be. When Picard gets a moment to demonstrate Ardra’s powers himself it’s a lot of fun.

Also fun in the episode is Data continuing his work as an actor as he performs in A Christmas Carol at the beginning of the episode.

Airing on 11 February, 1991, Bruce D. Arthurs and Joe Menosky penned the teleplay from a story by Arthurs. This one ends up being a fun little mystery as the crew seem to be suffering from missing time.

The ship’s logs, and crew’s own memories suggest that they were only unconscious for thirty seconds after passing through a wormhole, but other things around them indicate they are missing more than half a minute of their lives.

And Data may know everything, and he isn’t sharing. In fact, Picard and the rest of the crew begin to suspect, for the first time, that Data is lying to them.

I quite like all the character interactions in this episode, and love the reveal of what really happened, as well as the fact that they try to make sure that no one remembers once and for all.

My only question is, wouldn’t their chronometers, not to mention the stardate be greater than they think it should be? And wouldn’t that be an easy thing to confirm simply by contacting the closest starbase?

Nitpicking, I know, but these things popped into my head as I watched the episode.

I like how this story unfurls, and like the glimpses of recreational life given us of life on the Enterprise, Worf (Michael Dorn) is teaching exercise classes, and Picard and Guinan (Whoopi Goldberg) are enjoying some mystery in a Dixon Hill adventure.

I quite like this episode, though there are some faults. 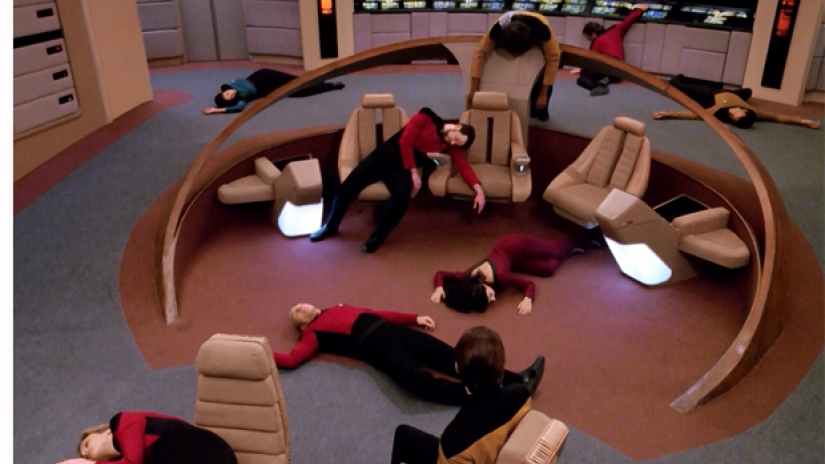