Nine years before Julian Fellowes created Downton Abbey, he wrote Gosford Park from an idea from filmmaker Robert Altman, and it is the next title on the What Else to Watch list in DK Canada’s The Movie Book, following their recommendation of The Rules of the Game.

The film balances a mystery, drama, with hints of comedy while perfectly serving up the upstairs-downstairs class stories that would serve Downton so well.

It’s a hunting weekend, as people gather at the McCordle estate, Gosford Park – though never referred to by its name, and while the elite drink, cavort, and backstab one another, they seem slightly clueless, and ill-mannered when compared to the serving class that waits on their every need.

As the weekend unfurls we learn of affairs, business deals being changed, and the cutting off of funds, all done by McCordle (Gambon), himself. Something that gives many of the weekend’s attendees, as well as the servants, a number of things to be angry about.

But someone gets more than angry, and McCordle ends up dead (a couple of times over). Murder most foul. 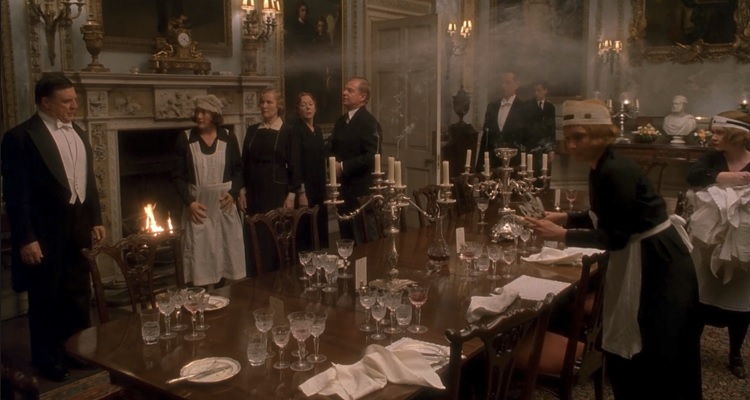 Inspector Thompson (Fry) arrives to investigate, and one has to wonder whether he will come up with the right conclusion, let alone the correct suspect.

I haven’t always been a fan of Altman’s work, there are a few that I really like, while others I feel are just pondering, plodding films. This is not one of those. This one is really fun, and knowing how he did things behind the scenes made this film all the more enjoyable.

For instance, instead of a boom mic, he made sure that everyone had their own individual mic and that way the overlapping conversations made for a more natural environment. Also, pretty incredible, is that the serving staff did not have any screen makeup on.

The dialogue is sharp, the performances are crisp, and the camera is always moving. I was pleasantly surprised with how much I enjoyed this film, and all the names in it virtually guaranteed I would enjoy it immensely.

This one should be a must for any Downton fan, as they will recognise so much of it. In fact, in its original incarnation, Downton Abbey was supposed to be set in the same universe as Gosford Park.

This one delves into class structure, murder, and English standards, and does it in an extremely entertaining way!

You can find this one, and other brilliant films in DK Books’ The Movie Book. Check it out and find something amazing to watch tonight!