Gates McFadden gets a long overdue Crusher-centric episode that was written by Lee Sheldon. This episode first aired on 22 October, 1990.

The Enterprise arrives at Starbase 133, where Dr. Crusher meets up with an old friend, who is catching a ride home with them. Unfortunately, he disappears, and seemingly has never existed.

Soon, however, more people are disappearing from the ship, whittling away all the people around the ship’s doctor. Her friends, shipmates, all vanish. The ship’s computer suggests that nothing has happened, that the ship has always had this decreased complement.

A complement that grows smaller and smaller by the minute, until Crusher is all alone.

Not surprisingly, the rest of the world exists, it’s just that Beverly Crusher has been caught inside an ever shrinking warp bubble, one that if she doesn’t find a way out of will remove her from the universe all together.

Would it surprise anyone that young Wesley Crusher (Wil Wheaton) was conducting an experiment with the warp engines that caused the whole thing?

McFadden is long overdue for a story of her own, and she handles it easily. In fact I was happy to see her have a moment to shine. The episode has a sense of mystery around it, which wonderfully unfurls as we watch.

Once the reveal of what is really going on is unveiled, the story shifts from mystery to science, but it remains a lot of fun.

Gates needed more to do in the series, and I loved that she got to do this one.

And from a movie buff point of view, I love the look of he vortex, and the silhouette images that move in front of it, it puts me in mind of Poltergeist. Love that movie!

Themes of family continue in Legacy which was written by Joe Menosky. We’ve had long lost brothers and other family members show up this season, and now it’s time for another one, a woman claiming to be the sister of the late Tasha Yar (Denise Crosby) has found her way aboard the Enterprise, and may be manipulating the emotions of the crew towards her sister for her own ends.

On October 29, 1990, Picard, (Patrick Stewart), Riker (Jonathan Frakes) and Data (Brent Spiner) along with the rest of the crew meet Ishara Yar (Beth Toussaint) when the Enterprise arrives at the planet, Turkana IV. This is the same planet Tasha escaped from as a child, eluding the rape gangs, and avoiding the warfare that seems to dominate the planet.

Taken by the idea of this being Tasha’s sister, all of the crew, especially Data are intent on helping her, even as they look for the crew of a downed pod that crashed on the colony.

Ishara says she can help if they remove a tracking device from her body, but that may be all a ploy.

Unfortunately, the episode doesn’t delve into the gang warfare or the talk of rape gangs that Tasha escaped. This would have made for a darker story, and would have been something to see, Trek handling these terrible things, and how they could possibly still occur in the 24th century.

The Human Adventure continues next week. 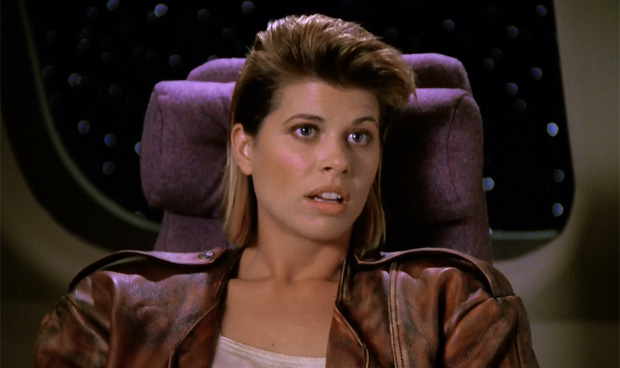