Season 2 got underway on 21 November, 1988 with The Child a re-purposed script from the 1970s proposed Phase 2 series that eventually became The Motion Picture. It was an Ilia and Decker story, with Ilia being switched to Troi (Marina Sirtis).

Written by Jaron Summers, Jon Povill and Maurice Hurley, the story finds Troi inexplicably pregnant. We later learn it’s an alien being who wants to experience humanity, but its presence begins to threaten the Enterprise.

There are some nice additions to the series that are seen for the first time in this episode, Riker (Jonathan Frakes) gets a beard, Worf (Michael Dorn) has a new baldric, Ten-Forward the ship’s lounge is first seen, as is the host, Guinan (Whoopi Goldberg).

Geordi (LeVar Burton) is promoted to Chief Engineer, and we are introduced to the new ship’s doctor, Pulaski (Diana Muldaur) who replaced Crusher (Gates McFadden) who was let go at the end of Season 1.

It’s a simple show, and while the idea is nice, and it puts Troi at the centre of a story for a change, it really doesn’t give Sirtis a lot to do as it still falls on all the characters around her to figure out things instead.

Definitely not a strong start to the season. On the upside Colm Meaney starts to appear regularly from here on out, and will soon get a name!

Where Silence has Lease is an episode that I’ve always kind of enjoyed. It first aired on 28 November, 1988. Written by Jack B. Sowards the story is pretty interesting, and also introduces Worf’s calisthenic workout that he shares with Riker.

The Enterprise comes across a rift in space and when they move closer to investigate they are swallowed whole by the darkness. Within, they find themselves the subject of experiments as they are taunted with the possibility of escape.

It seems that they are prisoners of a strange being called Nagilum (Earl Boen) who has plans for the crew.

But Picard, when he realises there is no escape comes to the only solution for he and his ship that he can…

There are some great moments to the episode, and I love the way the story messes with the characters. There’s an air of mystery hinted with a little fear to the entire episode that works very well. 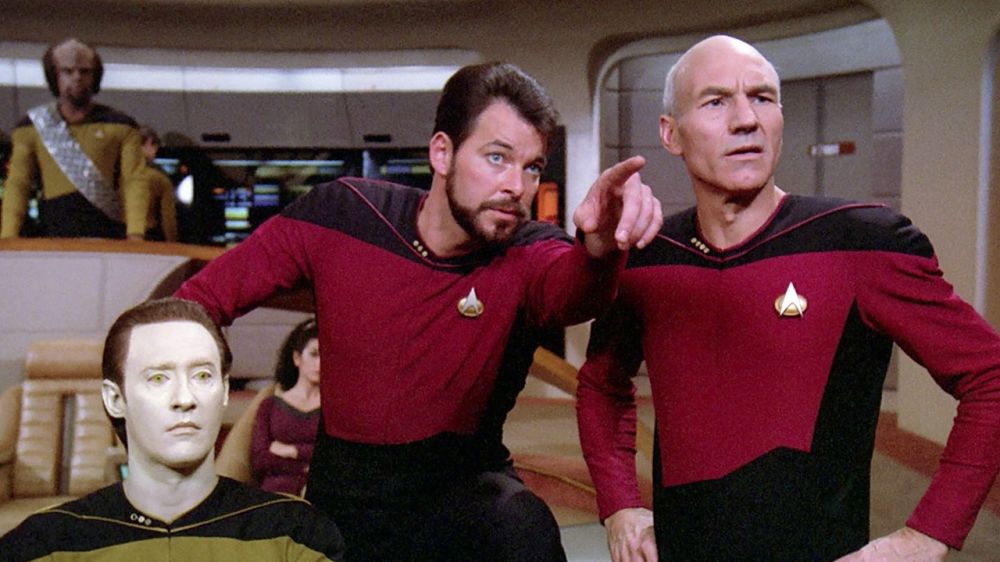