Sam (Scott Bakula) finds himself in rural Washington state on 6 November, 1972. Despite the fact that he is mistaken for bigfoot in the episode’s opener, we soon learn he’s a Vietnam vet, named Henry, who has been living in the woods.

The Beast Within was written by John D’Aquino, who previously played Frank in the Jimmy episodes. This one aired on 16 March, 1993 and brings us one episode closer to the end of the series.

Al (Dean Stockwell) tells him that he’s there to make sure that a fellow veteran, Roy (Sean Sullivan), who suffers from fits, gets the medication he needs before he dies from another seizure.

As the story progresses we learn that Henry, Roy and the local sheriff, Luke (Pat Skipper) all served together, and when they returned from Vietnam he married the widow, Karen (Eileen Seeley) of one of their lost friends, in an event that they blame one another for.

Karen’s son, Daniel (David Tom), has glimpsed Henry a number of times, and believes that he may in fact be bigfoot, and goes into the woods looking for him. Where he meets up with Roy and Sam.

Things come to a head when Sam comes into town to get the medication for Roy and is arrested by Luke, all while Roy and Daniel are in dire straits in the woods.

I rather like this episode, it’s just the goofy final moments of this one that make it cheesy. The rest of it makes for a good Leap story. 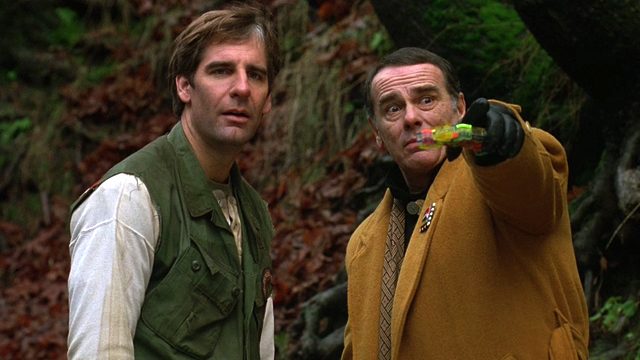 The Leap Between the States is the first and last time that Sam leaps outside of his own lifetime. Written by Richard C. Okie this one aired on 30 March, 1993.

Sam finds himself in the form of his great-grandfather Captain John Beckett, a soldier in the Union army, on 20 September, 1862. He knows he’s not there to make sure his ancestors, Beckett and a Southerner, Olivia Barrett Covington (Kate McNeil) , so he simply has to make sure that event plays out as before, but there are other issues that Sam finds himself involved in.

He hides in Covington’s barn, trying to recuperate from bullet wound he received when he leaped into a clash between the Union and the Confederacy. But problems arise from Confederate Lieutenant Richard Montgomery (Geoffrey Lower), and aid received from Covington’s slave, Isaac King (Michael D. Roberts who also appeared in the first season classic episode The Color of Truth).

When he discovers that Olivia and Isaac are hiding runaway slaves and could in fact be part of the underground railroad, Sam knows why he’s there.

This episode shines as one of the best of the season, and has some wonderfully crafted moments, and characters. I’m glad that this idea, leaping along the genetic traces of his own DNA, which allowed up to jump outside his lifetime, wasn’t exploited throughout the series, it makes for an incredibly enjoyable episode, and a nice one-off.

If they had done something like this in the third season, or earlier, this might have been something they did once a season. Happily, it works well, and the idea wasn’t over-used. How could it be, when there is only two episodes to go?

And the episode closes with Sam leaping into a familiar face, and swagger, Elvis Presley… Oh, boy. 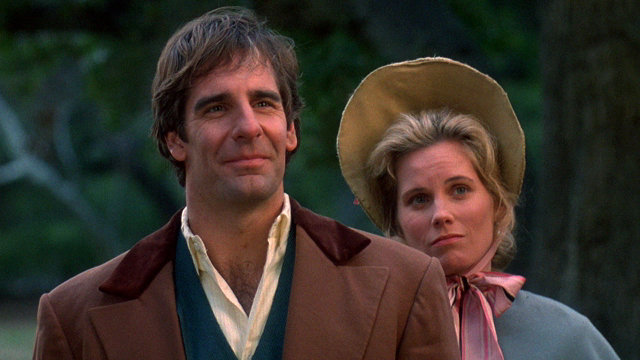