This week, we dive into The Twilight Zone: The Complete Series, available now from Paramount!

The Twilight Zone got underway on 2 October, 1959 with Rod Serling  plunging Earl Holliman as Mike Ferris into madness with Where is Everybody?

Mike Ferris doesn’t know who he is, and he doesn’t know where everyone else in the small town he finds his way into is. As Mr. Ferris wanders through the town (film lovers will recognize it as the back lot set that also served as Hill Valley town square for Back to the Future), finding a coffee pot coming to a boil in a deserted diner, a mannequin sitting in a car, a ringing phone, a still smouldering cigar, but no one anywhere.

Mike begins his descent into madness as he tries to figure out what is going on. Serling puts in subtle nods to what is actually happening to Ferris throughout the story.

Yes, in true Twilight Zone fashion, there is a but of a reveal at the story’s end, but it is no where near the twist that Serling originally wanted. Still, it sets the tone for exactly what viewers would get from the series, entertaining stories that unnerve, entertain, and captivate.

There is a lot to be said for Holliman’s performance (a large portion of it made while he was running a temperature), there is a controlled panic to it, which eventually overcomes his ability to restrain – it truly is a descent into madness.

What a fantastic way to start the series.

The episode features commentary by Holliman, an isolated score by Bernard Herrmann, a lecture by Serling, and a radio play adaption starring John Schneider. 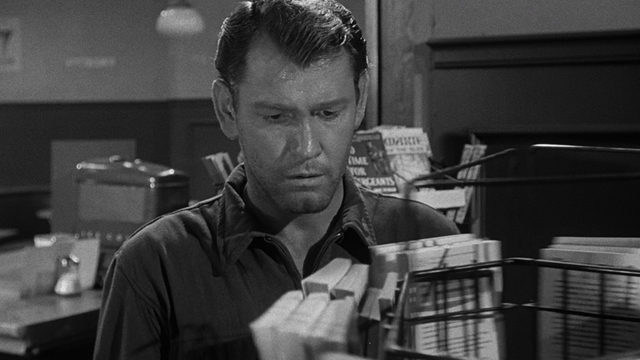 One for the Angels showed Serling’s playful, and darker side. Premiering on 9 October, 1959. The episode put Ed Wynn and Murray Hamilton (who will always be Amity’s mayor in my mind) against each other.

Wynn is Lou Bookman, a pitchman , who sells robotic toys, ties, anything. He lives in a busy city, the kids in his building love him, and he’s a good-hearted soul, but unfortunately, he has a visitor that he would rather avoid… Hamilton’s Mr. Death.

It seems Lou’s departure has been planned, and Mr. Death is there to guide him on his journey.

Hamilton’s Mr. Death plays as almost an accountant, it’s all numbers, and organisation to him. I like his resigned exasperation in dealing with humanity. Meanwhile, Wynn plays Bookman not as a man who feels afraid of dying, but hasn’t done anything and simply doesn’t want to go.

He argues that he has unfinished business and wants to make the pitch of pitches, seeing it as a way to avoid Death.

Death, however, has other ideas of course, and warns of the consequences of Bookman’s actions. Lou isn’t bothered, until a little girl in his building, Maggie (Dana Dillaway) is hit by a car.

Now, Lou has to make the pitch that will save Maggie’s life.

This is a great episode, it starts out so playfully, and by the act break, and as Lou realises what he must do, it becomes poignant, and wonderfully acted.

Right from the beginning Serling not only wrote fantastic stories filled with humanity, compassion, mystery, wonder, and sometimes outright terror, but brought them to life with amazing actors.

This episode, easily one of my favourites includes sponsor ads, an interview with Dillaway, commentary by Gary Gerani (film historian), an isolated score, and a radio adaptation starring Ed Begley, jr. 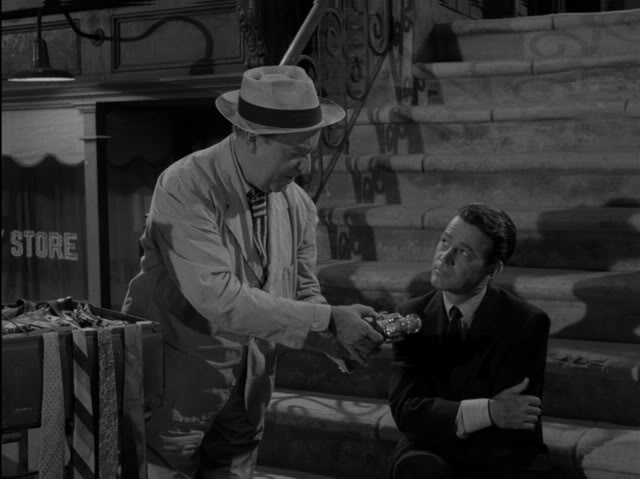 Our final stop this week is with Mr. Denton on Doomsday. This episode aired on 16 October, 1959 and this time Serling’s script had a bit of a western flavor.

The town drunk, Denton (Dan Duryea) has to face his past, as well as Dan Hotaling (a villainous turn by Martin Landau) when Fate (Malcolm Atterbury) comes to town.

Landau is downright evil, costumed all in black, and bullying and torturing Denton for his own amusement. Things will change when Henry J. Fate, a dealer in everything, rides into the little frontier town.

Denton would give anything for a second chance, and when a Colt .45 ends up in his hands, things begin to turn around. He starts to find himself again, crawling out of the bottle, finding his self-respect, and maybe even the love of a good woman, Liz (Jeanne Cooper). But if word spreads about his skills as a gunfighter (once again) what happens when folks come calling to find out how fast he is?

I have to say, I love the ending of this one, and the message it conveys. Man, he could write.

Serling’s masterful narrations throughout the episodes are top-notch, illustrating his talent as a writer, his words augmenting the world he’s created as he coaxes thoughts, emotions, and empathy for his characters, and the situations they find themselves in.

Along with the sponsor billboard, this episode has an isolated score, and commentary by Landau.

We’re off to a great start thanks to The Twilight Zone: The Complete Series from Paramount. Until next week, watch for the signpost that will take you into… the Twilight Zone.