Clark has big plans for his parents, Jonathan (Mike Farrell) and Martha (Shelley Fabares), as they are coming to Metropolis for Father’s Day. Kalibak’s arrival may cause some serious problems for the Kent family.

As a brutal, knock down, drag out fight takes place around Metropolis, Supes tries to make it back to his father, who may have been injured in Kalibak’s initial attack. Darkseid’s son has power and strength almost equal to Superman’s so it gets pretty rough for our hero.

As the episode plays out, Darkseid makes some tough decisions about his own family, while he continues to lay his own plans to break Superman, once and for all.

This one isn’t big on story, in fact, it’s mostly just one big fight sequence, but it lays important groundwork for the continued threat that Darkseid will present in the DC Animated Universe.

4 October, 1997 marks the airing date for World’s Finest, and the first teaming up, in this incarnation of Superman and Batman (Kevin Conroy).

The Joker (Mark Hamill) has stolen a statue made entirely of kryptonite, and has brokered a deal with Lex Luthor (Clancy Brown) to kill Superman. But their plans may be thwarted when the Dark Knight arrives in Metropolis and the two heroes team up!

Lois (Dana Delaney) is in some initial trouble aboard Air Force One, and makes for a a pretty big action sequence to give this three part story the giant-sized action beats it needs to get things underway. And Lois almost asks Superman out on a date, finally – until she gets a look at Bruce Wayne.

Knowing that they they have three episodes (we finish it next week) to tell their story over, this one takes it’s time, and feels a little more epic, and even more entertaining, in nature.

The first part ends with the two heroes learning one another’s identities through surreptitious ways, while the Joker is cementing his power base in Metropolis.

When Lois is kidnapped by Joker and Harley the already strained relationship between Clark and Bruce gets ratcheted up a notch or two, and Joker seems to hold all the cards.

But with Batman at his side, Superman may have a chance at stopping Joker and saving Lois.

But Luthor and the Clown Prince could just be getting started.

As Lois ponders a move to Gotham, the two villains launch their next plan, and both Superman and Batman may have just walked into a trap.

Guess we’ll have to find out next week, same bat-time and up, up and away! 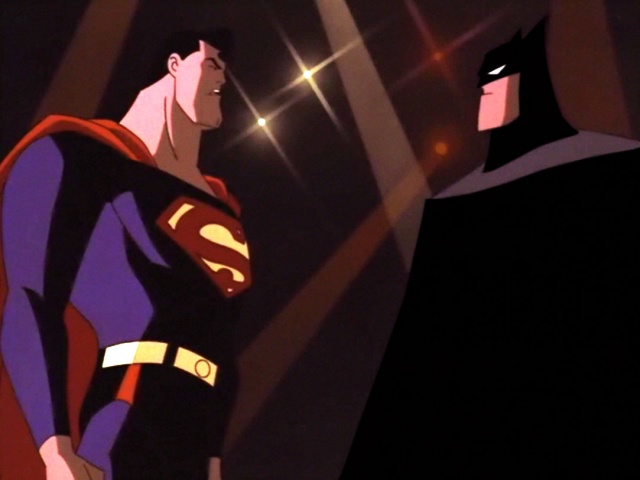