You need to worry about any movie that thinks it’s a good idea to use Rob Schneider as your comic relief, and this, my next stop in the Sci-Fi Chronicles book is filled with potential, but those involved just didn’t seem to get the source material.

Danny Cannon presents a busy MegaCity, a fairly familiar environment to the fans of John Wagner’s and Carlos Ezquerra’s landmark comic book creation, but none of those involved with the film seem to be real fans of the source material.

Opening with a narration by James Earl Jones and comic book covers from the series during the titles, you can fill your hopes build a little, but the fact that Sylvester Stallone seems to want to take off his Judge’s helmet immediately, shows he doesn’t get the character (Karl Urban gets it though) though his costume is a little close to the original design (though too shiny), and his pistol, the lawgiver, is fairly on point to the original design.

The film does have a score by Alan Silvestri, and that is always a plus.

The film’s attempts at humour are very much off the mark, though some of it seems in keeping with the comic, not enough to redeem the film however.

Dredd and his partner Judge Hershey (Diane Lane) find themselves trying to root at a murderer, A murderer who has framed Dredd for the crime. 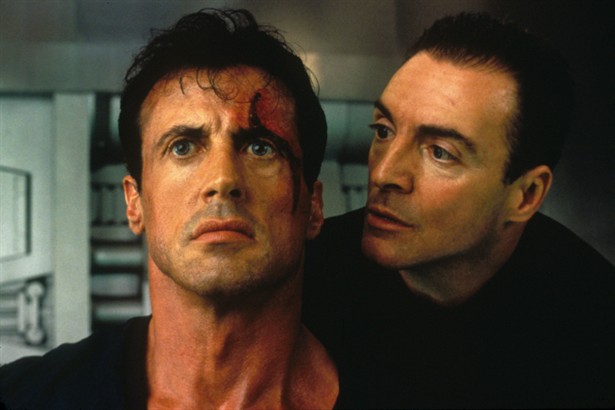 Featuring a pretty solid supporting cast, if you ignore Schneider, includes Armand Assante, Jurgen Prochnow, Joan Chen and Max von Sydow, the film is a could have been.

The set design considering the state of the MegaCity is a little too sleek and clean looking, it should be a lot more worn down and dirty. Again, something in keeping with the newer film, Dredd (if only we could get a follow-up to THAT!).

The story itself is very basic, there is only one villain in the piece and it’s pretty obvious from the get go that there is a connection between Dredd, and Assante’s baddie, Rico. It also walks the line of being almost camp, which is too bad, because the source material, despite occasionally being goofy, also tends to be very wry and ironic, alongside it’s ultra-violent.

Stallone’s Dredd, however, despite wanting to be the unflappable, lawgiver seems more intent on delivering a new catchphrase which never works, and is in fact, eye-rolling every time it’s said (‘I knew you were going to say that.’)

A missed opportunity at best, there are things that could totally have worked in this film, but it ends up being a Stallone film, instead of Judge Dredd film, a wanna be science fiction action film, instead of a faithful comic book adaptation.

I’m going to have to watch Karl Urban in Dredd to get rid of the bad taste of this one.