John Corben (Malcolm McDowell) returns as the cyborg Metallo to menace Superman (Tim Daly) in The Way of All Flesh, which had an original airdate of 28 September, 1996.

Corben breaks out of a prison after an attack, while Supes easily handles the rest of the escapees, John eludes our hero. He meets up with Luthor (Clancy Brown), who ‘heals’ the ill baddie, he’s suffering from a rare disease, and turns him into a robotic cyborg, it’s frame powered with kryptonite.

Unfortunately, Corben loses all the things that made him human, hunger, touch, smell, and consequently goes a little mad, tearing apart a commuter train. Superman races to confront him.

With the kryptonite, Corben handily deals with Superman, but his continual loss of all the things he treasured about being human drives his rage, his mental break, and his desire to destroy everything.

Lois (Dana Delaney) and Clark investigate Corben to find what became of Corben, tracking a missing doctor, and his connection to LexCorp.

When Superman arrives to confront Luthor, he finds himself in an all-out brawl with Corben in a fight he may not be able to win, unless he can prove that Luthor manipulated Corben from the beginning. 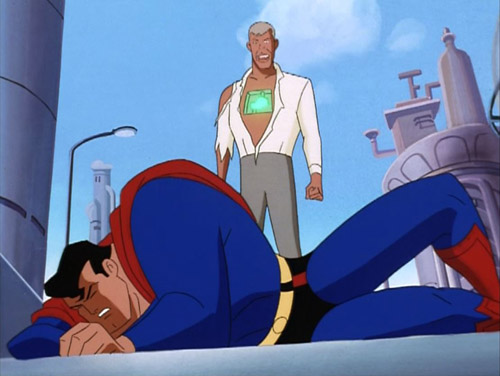 Stolen Memories aired 2 November, 1996, and features the arrival of Braniac (Corey Burton) on Earth. The cybernetic being is continuing his data-gathering, but when it has learned all it can about Earth, the evil intelligence plans to destroy it.

As Lois and Jimmy (David Kaufman) investigate a Luthor lead, they learn that Luthor has been in contact with the alien intelligence. Superman, meanwhile, has been testing a hyperspace rocketship for S.T.A.R. Labs, something that will pay off in future episodes, if not this one, I’m sure.

When Luthor sets up a meeting between the two aliens, Superman finds himself in (surprise) a violent confrontation with Braniac’s many robotic forms. The intelligence reveals its origins to Superman, and all the knowledge he has, including that of their shared homeworld of Krypton.

In a poignant moment, he sees his birth planet for the first time, but Braniac won’t share everything with him, unless the Superman agrees to work with him, travelling with him on its pre-programmed mission.

Superman learned more than Braniac thought, and realizes that the artificial intelligence is truly a threat to not only him, but humanity, itself and possibly the entire galaxy.

Will Luthor help, or sell out his entire planet? Can Superman stop Braniac? Will the powerful villain menace the Kryptonian again? 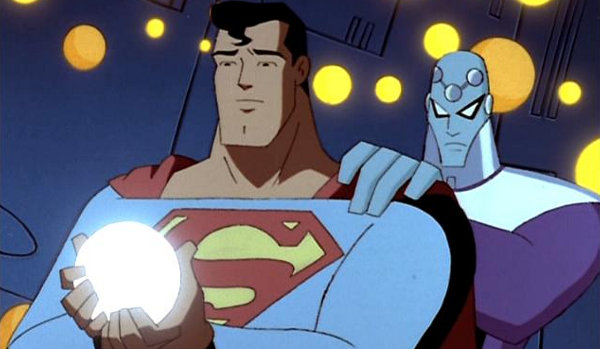 The DC Animated Universe just got a little bigger and a lot more interesting with the introduction of the powerful, but not so clever, mercenary, Lobo (Brad Garrett) in The Main Man: Part I, which aired 9 November, 1996.

The episode opens with Superman testing the rocketship a little more. What’s weird is that they talk about the ship as if they just started testing and using it, despite what we saw last episode.

As we are introduced to the violent mercenary, we get a look at some of the strange aliens populating this universe, and some of them are downright odd.

The Preserver (Sherman Howard) commissions Lobo to capture Superman for his collection, and the big oaf comes to Earth looking for the big guy.

The two battle in the skies over Metropolis, until Lobo learns that Superman cares for the planet’s denizens, and uses that, against him.

Instead, Superman takes the rocketship out into space where he confronts Lobo away from Earth, but it’s also close enough for The Preserver to grab him and install him in his menagerie in a Kryptonian setting (including the light of a red sun to stop Superman’s powers)!

Will Superman escape? Will Lobo help him after The Preserver betrays him? I guess we’ll find out next week!