The youth of Gotham are in the target sights in the first episode this week, as we continue the New Batman Adventures. Mean Season aired 25 April, 1998, and sees Batman (Kevin Conroy) and Batgirl (Tara Strong) taking on the mysterious Calendar Girl (Sela Ward), who is attacking youth media events all over the city.

At her side are a bunch of Chippendale dancers, and lords know where they keep their guns…

Bruce, meanwhile, thanks to some comments from Lucius (Mel Winkler) is thinking about aging, a counterpoint to the youth-oriented events that the Caped Crusader finds himself investigating as Calendar Girl’s attacks continue.

Calendar Girl’s real name is Page Monroe, she was a model, until she turned 30 and everyone wanted someone ‘younger.’

Bats and Batgirl take on Calendar Girl, who has grown to hate her face so much, simply because she’s aged, that she hides it away, sending a rather poignant message about aging that may be missed by younger viewers.

Barry Bostwick as a sleazy agent, Dennis Haysbert as an event announcer and Tippi Hedren (!) as fashion designer Donna Day all lend their voices to the episode and amazingly, a dinosaur makes an appearance, course it may explain why Bats has one in his Bat Cave. 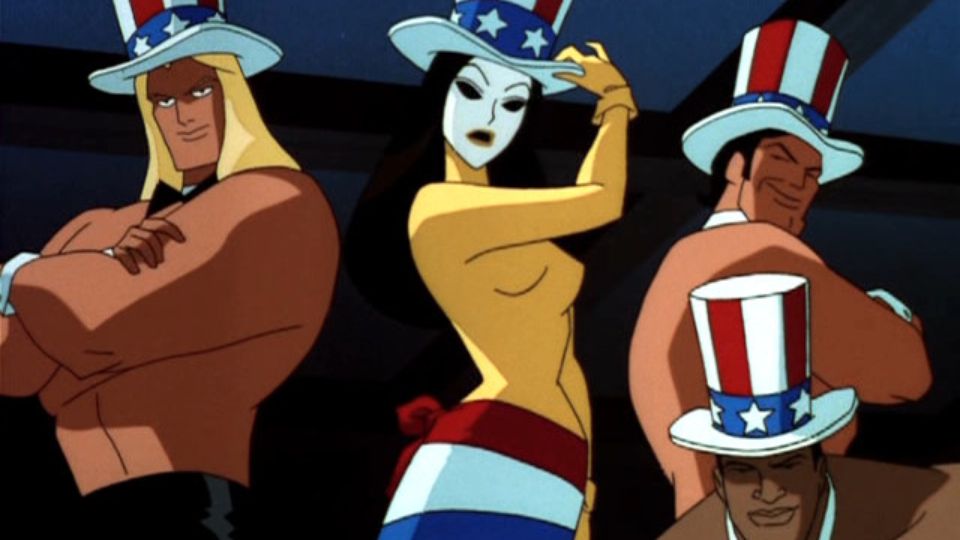 The Demon Within aired 9 May, 1998, and sees the introduction of Jason Blood and Etrigan the Demon (both voiced by Billy Zane) into the DC animated world.

Klarion the Witch Boy (Stephen Wolfe Smith), seriously, that’s his name, seizes control of Blood when he’s in his Demon form, and begins to wreak destructive mischief. It’s up to Batman and Robin (Matthew Valencia) to put a stop to it.

Tim and Bruce are at a museum for an auction, where young Tim Drake bumps into Klarion, a fellow youngster, and immediately chafes against him.

We get Etrigan’s backstory, apparently, he was originally a demon servant to Merlin, but they are given little time to learn more when magical events begin to take place and our heroes find themselves fighting beside the demon to stop Klarion and his shape-shifting cat.

That is until Klarion summons Etrigan for his own purposes. Blood, now separate from Etrigan, is aging rapidly, and Bruce needs to stop Klarion before his friend dies, and does so with some magic of his own.

An interesting episode, but maybe not the best one to introduce Etrigan to the universe, I always thought he was scarier. 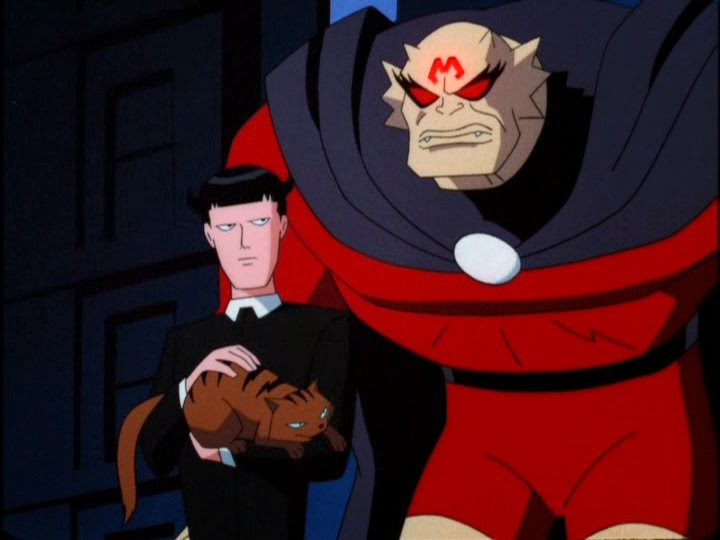 Over the Edge is the last episode up this week. It aired 23 May, 1998, and there is something very wrong going on in Gotham, it seems, somehow, Batman and the others’ secret identities have been revealed, and they now find themselves the subject of a police hunt!

Opening with a huge action sequence that sees Gordon (Bob Hastings) leading an attack on the Bat Cave. Then in a flashback, we see that Scarecrow (Jeff Bennett) may have killed Barbara Gordon during an attack on City Hall.

Now, Batman, Robin and Nightwing (Loren Lester) are on the run, but this can’t be real can it? Surely the Mad Hatter (Roddy McDowall) could be behind it!

As Batman’s allies are taken from him one by one, he decides that it may be time to hang up the cowl, and sends Tim away to be safe.

There are confrontations with Bane (Henry Silva), arrests, deaths, and it all seems to real, until the reveal both story wise and character wide. Both of which are played out nicely, which I don’t want to give away, but it’s done very well.

We’re coming up on the end of the series, amazingly enough, only thirteen left…