And for the most part, it’s pretty damned enjoyable, and arguably a step up from the previous entry. While I was unsure of Lin taking the helm (I’m not a big fan of the Fast & Furious series), hearing he was a fan of Trek made me a little more comfortable, and he does a solid job, except for some sequences, where I for one would rather see the action as opposed to hyper-kinetic editing and tight shots that give you a momentary glimpse of the action – that and a couple of interesting ‘classical music’ choices were a couple of the detractors for me (and a plot hole or two, but ones that could be argued around).

Beyond that, the film is exactly that, Beyond. Co-written by Simon Pegg, who pulls double duty returning as Chief Engineer Montgomery Scott, the film is filled with a few nods, some blatant (it’s the third film, so the Enterprise has to be destroyed) to subtle (mentioning a big green hand seizing the ship, a nod back to the classic episode Who Mourns Adonais?).

Captain James T. Kirk (Chris Pine) and the stalwart crew of the Enterprise are about three years into the five year mission and it seems they’ve become a little tired, a little worn from the endless exploration, losing their sense of self, and direction in an ever-expanding universe.

When a chance for a quick respite arrives at Starbase Yorktown, they take it, and we get a momentary, and honestly, very gratifying glance at personal lives off the bridge – there is the much touted Sulu (John Cho) moment, Chekov (Anton Yelchin) being charming and fun, McCoy (Karl Urban, still the most perfectly cast actor in the series) drinking with Jim for his birthday while offering sage, and doctorly advice, and Spock (Zachary Quinto) and Uhura (Zoe Saldana) having a break in the relationship.

Shore leave doesn’t last long when they are asked to answer a distress call, which leads them right into the hands of Krall (Idris Elba) who is determined to take the Federation apart for reasons all his own, refusing to believe that unity gives strength, and the frontier that they have been infringing on is ready to push back.

The biggest thing I loved about the film (besides Michael Giacchino’s score – I whistle his Trek themes on a fairly regular basis) is that we get time with each and every one of the main characters, unlike the previous films, this one truly feels like an ensemble peace. Everyone gets a moments, and it doesn’t feel contrived, it feels organic.

There are a number of nods, poignant and emotional all, to the passing of Leonard Nimoy that made me misty eyed each time, as well as the awareness that this would be the last time we see Chekov in the new universe.

Joining the crew this time out is the alien Jaylah (Sofia Boutella) and Commodore Paris (Shoreh Aghdashloo – who lends a wonderful sense of gravitas to everything she does), but they don’t infringe on the time we get to spend with our crew, in fact, they augment during a number of moments, as they see what the best crew in the fleet, and by extension, humanity, is capable of.

Yes, there are fights, chases (and despite the trailer the motorcycle bit, though a little contrived, isn’t a big thing), and space battles, but under it, there are some pretty strong themes and ideas at work, which is one thing Star Trek has always been known for. I won’t lay them out for you here, as the big one is actually central to the villain of the piece, but they are there, and seeing them, sensing their undercurrent throughout the film, actually made me nod and smile, and say, yes, this is Trek, probably the closest of the rebooted series yet to the original intent.

I loved that we got some new and interesting beauty shots of the Enterprise (though I do long for the days of practical models sometimes). I liked that Pine actually seems to be settling into Kirk nicely and I loved the McCoy/Spock interactions… just gold.

It seems like a step in the right direction for the new theatrical series, and that can only be a good thing, as long as they keep it up, I will continue to watch these new adventures on the big screen, while I impatiently wait for the new series to grace my home theater.

Star Trek: Beyond is in cinemas now. 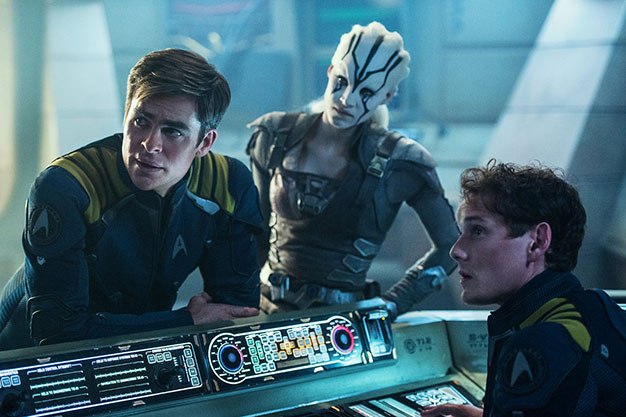