It’s Tuesday, must be time to check in with the Dark Knight (Kevin Conroy) in Gotham with the next trio of episodes!

First up is Harley’s Holiday, which aired 15 October, 1994. Harley Quinn (Arleen Sorkin) is released from Arkham Asylum, and seems to get into a huge load of trouble in record time.

With her pet hyenas, she seems to keep causing problems, flirting with Bruce Wayne, and tries, in her own way, to start over and find her way to the straight and narrow. Through misunderstandings, and accidents, Harley is in over her head quickly, despite the best of intentions.

Pushed too far, rather quickly, she takes Bruce’s current flame, Veronica (Marilu Henner) hostage and tries to get away and stay out of Batman and Robin’s (Loren Lester) way.

The caped duo go after her, as does half of Gotham’s police force. She turns to Boxy Bennett (Dick Miller) for protection, or at least a place to hide, until she can get out of town, but Boxy has other plans, to ransom off Veronica.

Harley rescues her, but the streets of Gotham get torn up as everyone, including Veronica’s father (Franklin Cover) in a tank, pursue the poor girls all over town.

Perhaps, despite best intentions, Harley isn’t ready to be back on the streets, and after a rooftop confrontation with Batman, who knows that she really is trying to better herself, takes her back to Arkham to finish her rehabilitation.

Poor Harley. She just had a really bad day. 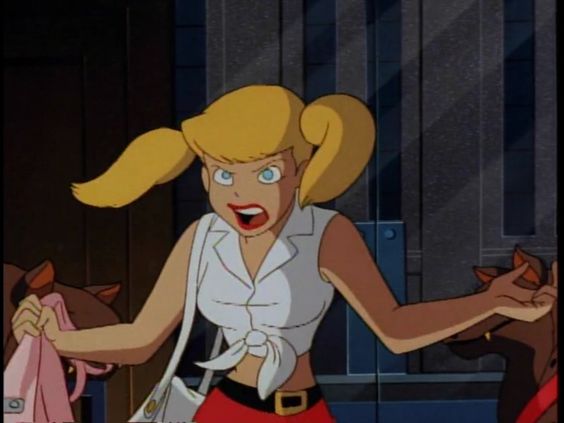 Make ‘Em Laugh aired 5 November, 1994, and sees Batman and Robin investigating a bizarre series of crimes being committed by stand-up comedians. Is it possible the Joker (Mark Hamill) is behind everything?

The episode includes some real comedians in the roles, including Andrea Martin – playing a Roseanne time character, Richard Jeni and Joe Piscopo.

Robin recognizes some of the names of the comedians committing the crimes, even when they are wearing strange costumes, and have strange names and weaponry.

This one ends up being a goofy, and fun episode, that shows all kinds of weird, would-be super villains trying to carve out a space for themselves in Gotham, all of them under Joker’s control.

All of it is being done, because the Joker showed up at a comedy contest last year, to find who the funniest person in Gotham was, and he was ousted by the judges. This year he’s using technology and Batman to rid him of any competition, and then making sure he wins the prize.

It’s a goofy episode, letting the Joker have a few shining moments that shows he really does want to be seen as funny and not just a villain, but, of course, Batman and Robin beat him, and as the world laughs at him, and not with him, the Joker is captured and taken away, once again. 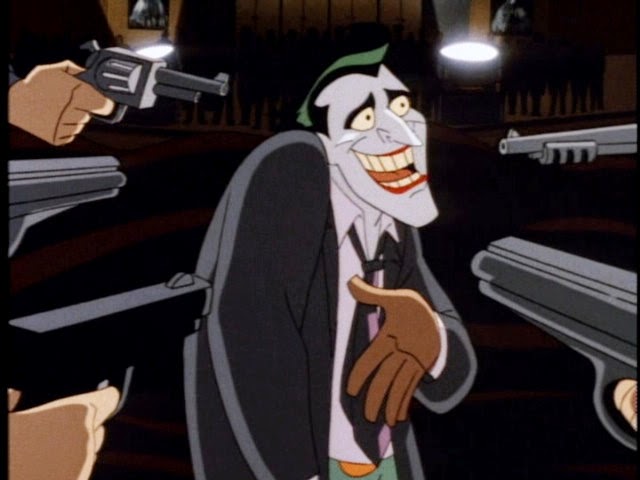 The final episode this week is Batgirl Returns. This one aired 12 November, 1994, and sees Melissa Gilbert returning as Barbara Gordon aka Batgirl. Also returning are Ed Asner as Roland Daggett and Adrienne Barbeau as Selina Kyle.

The episode opens with a rather amusing sequence, that reveals itself to be a dream, and it seems Babs has a bit of a crush on Bats.

Batgirl, Catwoman and Robin all team up together to recover a valuable cat statuette that was stolen. The unlikely trio have a hard time working together as suspicion clouds their actions, as well as wanting to prove themselves to one another.

Bruce is of no help to the Robin, because he is in Paris overseeing a business deal on behalf of Wayne Enterprises, and by the time he catches up to them, Catwoman and Batgirl are already working together, and busting heads as necessary, to get to the bottom of things.

It seems Daggett is behind everything and stole the statuette to sell of and re-finance himself after losing all of his funds during his previous encounter with the Bat. With Catwoman and Batgirl in mortal danger, Robin swings in to help out, and the three heroes take down Daggett… once and for all?

This trio of episodes was just good fun! 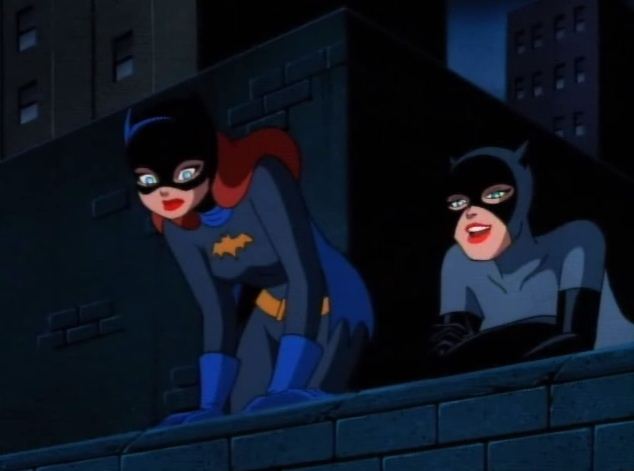