Thomas (Tom Selleck) comes to the aid of a deaf painter, Linda Andrews (Stephanie Dunnam) in the first episode this week. One Picture is Worth originally aired 8 October, 1986, and was written by James L. Novack.

Linda is a witness to a bank robbery that saw four people killed, but when the murderer, Jack Wilkins (Roy Jenson) is released on bail, she turns to Thomas for protection.

Carol (Kathleen Lloyd) is working with Thomas on a surveillance case, but she, as usual, has an ulterior motive, which provides some comedy, but nothing in this episode tops Higgins (John Hillerman) pretending to be Magnum.

Carol is the one who asks Thomas to look after Linda until they catch or stop Wilkins. He and Linda have a nice chemistry, although he talks a little louder than he needs to when communicating  with her (she reads lips). He arranges for her to stay at the estate, which actually delights Higgins, considering her standing as a renowned artist.

T.C. (Roger E. Mosley)is a fan of Linda’s and hopes to have her sign some prints, and also almost verbatim gives Thomas the same chastising Magnum gave Carol earlier in the episode.

When Linda’s photo gets leaked to the public she realizes she will be in the target sites of the killer, and flees the estate, so Thomas goes after her. Meanwhile Higgins poses as the private investigator to flush out the baddies, makes for a really funny moment, as he tries to emulate Magnum’s mannerisms and speech patterns.

A fun episode, that doesn’t quite rock along like most episodes, but still a string and fun entry. 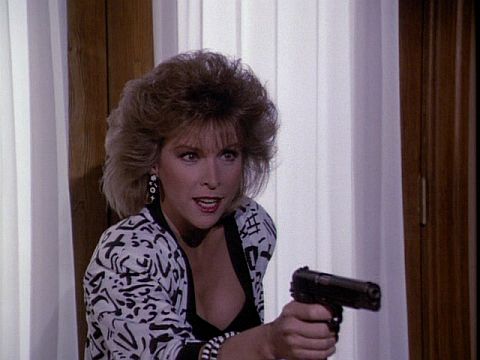 Straight and Narrow was written by Reuben Leder and aired on 15, October 1986.

Leslie ‘Scooter’ Emory (Candy Clark), the call girl from the episode, The Hotel Dick, is back, and this time she wants Thomas to find her missing sister, Patty ‘Bunny” Emory (Cindy Fisher).

Rick (Larry Manetti), T.C. and Magnum are training for the King Kamehameha Track and Field competition as the episode opens, after he sprains his angle, the trio retire to the club, and guess who’s working there as a server? And, of course, trouble follows.

The dialogue between the two of them is a lot of fun to hear, and how they interact is a joy. Magnum is unsure about taking the job, and she was unsure about coming to him in the first place. So when he agrees to take the case, is he really so surprised to find out that Patty is a call girl as well?

As the investigation continues, threads unravel, Leslie goes off on her own, and Higgins works some of his connections to put Thomas together with a successful businessman, but when things start to go sideways, Thomas is more than ready to walk away.

But his ethics, sense of justice, and need to know, not to mention his little voice, keep him on the case, and hopefully saves both Leslie and Patty!!

Until next time Aloha!