Tim Burton’s suburban fairy tale is the next recommendation from the Great Movies – 100 Years of Film following my screening of The Wizard of Oz. Perennial Burton favorite Johnny Depp is the titular character, a gentle young man, created by an elderly inventor (Vincent Price) who dies before he can give his creation human hands, leaving the young man with scissors in their place.

Living all alone in a gothic mansion, that towers over a color-coded suburban neighborhood, something that can only happen in a Tim Burton film, Edward is brought home by the local Avon lady, Peg (Dianne Wiest) when she discovers the young man while making her rounds.

She brings Edward into her life, and those of her family, daughter Kim (Winona Ryder), son Kevin (Robert Oliveri) and husband, Bill (Alan Arkin) and neighbors, including the local firecracker, and would-be seductress, Joyce (Kathy Baker).

Curiosity about the stranger in their midst leads to people interacting with him, and then discovering, and taking advantage of the young man’s talents with his dangerous fingers. Each neighbor tries to outdo the next with Edward, who simply wants to live his life, and is beginning to fall in love with Kim, much to her boyfriend, Jim’s (Anthony Michael Hall) jealousy and disgust.

Amidst gossip and misunderstanding, the fantasy and romance of this modern fairy tale unfolds and works its way into our hearts when things sour for Edward…

With some wonderful work by Stan Winston, I miss him every time I see his name in the credits of a film, the film comes to life as only a Tim Burton film can, as Edward moves from creating a topiary for yards, cutting dogs hair, and then, even serving as a stylist for the neighborhood women, until disaster and betrayal strike. 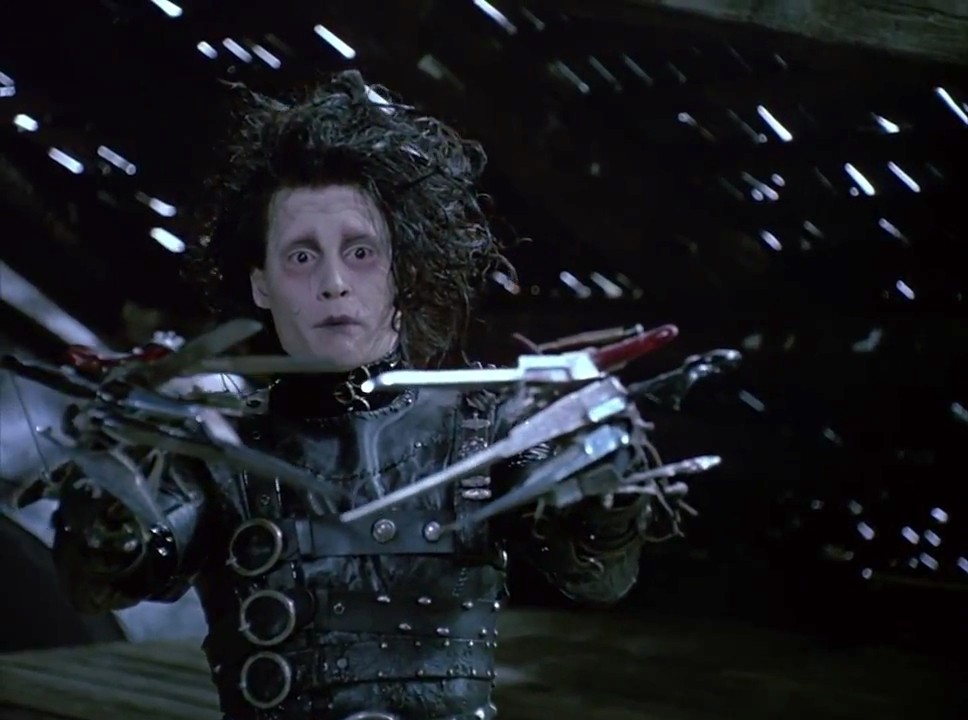 With his scissors for hands, Edward can’t help but draw comparisons as the gentle-hearted gothic brother of Freddy Krueger. They almost seem to be dark reflections of one another. But Edward’s story is so much sadder, because he begins to realize that no matter who he loves, pr what he does, he won’t be able to touch or hold anyone without hurting them.

Consequently he is forced to find and create beauty elsewhere.

Burton always had a knack for telling those slightly off-kilter tales, that resonate with viewers, and find their way into the collective consciousness, and this is probably one of his strongest ones.

There is so much I do like about this film. The simple colors of the neighborhood, and its inhabitants, all of whom begin to change when Edward begins to have an effect on them. It is also the tale of the fear of the outsider, and how, perhaps, the world of suburbia, and the places beyond it, may not be the safest place for those of us with gentle souls.

Once again, showcasing a score by Danny Elfman, the film still has the Burton magic, and reminds me of the early films of his that I love.