It’s a smaller week for the West End Comics pull list, but Kirk made sure to recommend a new title to me, and anyway, in just a couple of weeks, there will be a whole new Star Wars title, filling in some of the space between Jedi and Awakens… EXCITING TIMES!

Welcome Back (Boom Comics) issue 1, written by Christopher Sebela, art by Jonathan Brandon Sawyer, colors by Carlos Zamudio and letters by Shawn Aldridge. This one after the first of only a four issue run, feels a little bit like a new take on Highlander. Mali Quinn is 26, living in Kansas City and trying to forget her past. But her past goes back further than she realizes. She has dreams of violent confrontations always ending in death, of being different people. She’s a sequel, seemingly caught up in a never-ending war, and her memories, or parts of them, are triggered by a phrase used by her enemy.

The art is great, Mali is a real character, flawed, honest, and just trying to survive. And someone out there, is hunting her down, making sure she doesn’t. And a surprise guest at her apartment by the issue’s end sends her and the reader’s mind spinning.

I’ll definitely see where this one goes…

1872 (Marvel) issue 2, written by Gerry Dugan, art by Nik Virella, colors by Lee Loughridge and letters by Clayton Cowles. The Marvel Universe, set in 1872… Loving it. As Steve Rogers, as Sheriff, tries to get the town of Timely to rise up against Mayor Fisk, and out the truth about Red Wolf’s people and Fisk’s dam, a group of killers wander in to town at Fisk’s behest.

There’s Otto (Dr. Octopus), Elektra, Grizzly, and Bullseye. They are there to bring Rogers down, but perhaps, inadvertently, they’ll cause the town to draw together, and oust the villains, and once again be able to call their town home.

But there will be tragedy, and familiar names will be put onto paths that will lead them to their destiny…

This is a pretty sweet book so far, Marvel heroes and villains, all recognizable names, immersed in a Western existence… damned cool. 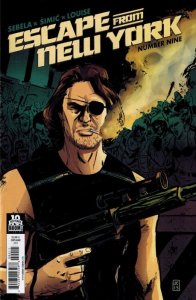 Escape From New York (Boom Comics) issue 9, written by Christopher Sebela, art by Maxim Simic, colors by Marissa Louise and letters by Ed Dukeshire. After a run-in with some well-armed Mounties, Snake heads south of the border, into the United States.

He’s planning on bringing the war right to the President’s doorstep. But of course, he’s in prison for treason after the failure of the Hartford Summit (thanks to the events of the film) and Snake has to break back into the prison that is New York to get to him.

He learns that there’s a new Duke of New York, but beyond that everything seems to be pretty much as he left it.

A fun issue, but there was a few grammar and spelling errors that had me wondering if this issue were rushed to print…

We finally get to catch up with Han, Leia and Sana Solo (?!), it’s a great sequence, as Han keeps claiming she’s not his wife, and Leia is angry and confused. And it seems she may be a bounty hunter…

Meanwhile, Luke Skywalker travels to the crime world of Nar Shadda, seeking new leads on the Jedi and passage to Coruscant, being disappointed over the fact that Kenobi’s journal seems to be just a collection of stories.

Trouble finds him, however, and things look as dire for him as they do for Han and Leia. As the Imperials close in, and Sana is offering to collect on the price on the head of a Princess…

And that wraps it up for this week. And if you’re a comic fan here in Toronto and you still haven’t checked in with Kirk at West End Comics, what are you waiting for?!?