Thomas (Tom Selleck) tries to deal with the death of a friend in the first episode this week, Legacy From a Friend that originally screened on 10 March, 1983, and was penned by Robert Hamilton. And… this one was directed by the Rockford Files’ Stuart Margolin!

When his friend is found dead, drowned. Magnum finds himself looking into the case as he refuses to believe that the young lifeguard could die in such a way, and when he was seen before his death with a car beyond his means, Thomas realizes there is more going on here than suspected.

Unfortunately, he finds himself paired up with a young woman claiming to be the girlfriend. Her name is Tracy Spencer (Annie Potts), but she may have her own agenda as the case unfurls.

The car leads the pair to a Mrs. Chase (Rosemary Forsyth) as well as Rose (Bob Minor) who sells stolen goods… Tracy and Thomas pose as buyers to learn more, but things go sideways for the pair pretty quick.

I was delighted to see Julia Nickson pop up during the course of the episode, while Thomas is running down leads… it’s only a small appearance sadly, but leads directly to Magnum getting his butt kicked, which leads to T.C. (Roger E. Mosley) and Rick (Larry Manetti) getting a laugh or two at the expense of the private investigator.

A fun episode, especially the moments with the boys all having fun at one another’s expense. 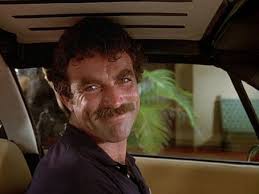 Next up is Two Birds of a Feather. This one aired 17 March, 1983 and was written by Bellisario himself, and if memory serves, was designed as a backdoor pilot for William Lucking’s character of Sam Hunter.

Hunter is a pilot, much like Lucking portrayed in Tales of the Gold Monkey, right down to the cowboy hat and harmonica playing of Yellow Rose of Texas, flying his plane to Hawaii. When the plane runs out of fuel before reaching the islands, he’s forced to bring it down… right into the estate’s tidal pool.

While Hunter returns to the mainland, hoping to make it in time for his son’s birthday, Thomas, with Higgins (John Hillerman) at his side discovers that someone planted lead bars in the plane’s seats to make it heavier, using more fuel… someone wanted to bring the plane down.

Hunter meanwhile makes time for his son, Kip (Chad Sheets), and his ex-wife, Jen (Joanna Kerns). This side of the story sets up the characters for the potential series, their relationships, and his business.

And the business ends up being the key to the case as well, as someone in the company, Nick (John Calvin) is working with a drug distributor, Sato (Soon Tek-Oh) and Hunter was getting too close to the truth.

This one is ok, but taking Thomas and the gang out of the limelight for a large chunk of the story doesn’t do it any service…