And just like that, we come to the last adventure of Pertwee’s Doctor. His last story, Planet of the Spiders, was penned by Robert Sloman, and ran from 4 May to 8 June, 1974.

At UNIT headquarters the Doctor and Lethbridge-Stewart (Nicholas Courtney) are questioning a mesmerist in the Doctor’s exploration of psychic phenomena, specifically ESP and telekinesis. A package from Jo Grant (Katy Manning) sees the return of the blue crystal she was given at the end of The Green Death story. The man being examined, Clegg (Cyril Shaps), has an adverse reaction to the crystal, having a vision filled with spiders.

Across the country, Yates (Richard Franklin), now retired from UNIT, is recuperating with a mystical group of Buddhist practitioners, but there seem to be some odd things at work here, so he reaches out to Sarah-Jane (Elisabeth Sladen) for help. Joining him on the investigation they soon find more trouble than they imagined.

The group summons up a giant spider, from the planet Metebelis III, the same planet the crystal came from, and it immediately jumps upon the back of one of its summoners, Lupton (John Dearth), vanishing from sight (sounds familiar to those who have only seen the new series…). Though invisible, it can interact with its host, enhance its psychic abilities, and they plan a conquest of the planet, and also seek the crystal, now safely back in the hands of the Doctor, at the command of The Great One.

We’re afforded a rather large chase when Lupton breaks into UNIT headquarters to steal the crystal, which results in a rather larger chase sequence (especially for Doctor Who – but finale and all…) featuring the new Who-mobile, Bessie, and a gyrocopter, and even some boats. Lupton abscond, temporarily with the crystal, before its recovered by the forces of good.

Both Sarah-Jane and the Doctor end up on Metebelis III in pursuit of the crystal, an event which will lead directly to the Doctor’s need to regenerate… he gets shot by one of the Spiders’ many servants, collapsing in front of the TARDIS. He recovers, and goes off in search of Sarah-Jane, who has been captured, and cocooned, either to be saved for food, or service. The Doctor’s attempt to rescue her fail, and he ends up in the same position, before they are both able to effect an escape back to Earth, after being unable to face the Great One…

On Earth they learn the crystal enhances the mind, and that the Great One plans to use it to augment her powers and rule the universe. Conferring with one of the practitioners, the Doctor recognizes K’anpo Rimpoche (George Cormack) as a fellow Time Lord, who confides that the Doctor must face his fear of the Great One, even at the cost of his life, if he is going to stop the conquest of the galaxy.

With crystal in hand, he goes to have a final confrontation with the Great One, before, barely holding on to his life’s energy, he returns to UNIT to make his goodbyes, and regenerate…

I’m going to miss Pertwee’s Doctor, the Venusian Karate the terrible clothes, and the wit… But still, it’s time to catch up with the Doctor I grew up with… Tom Baker in his first adventure, Robot! 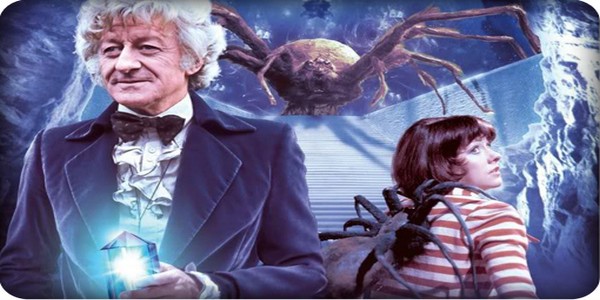