It’s time for that weekly round-up from West End Comics, where Kirk stalwartly mans his post, a bastion of pop culture filled with fantastic images, colours, and inks. Let’s jump right into it this week’s pull list shall we? 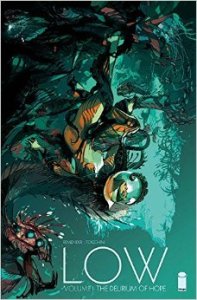 Low – Vol. 1 Delirium of Hope. Collecting the first 6 issues of this series written by Rick Remember, with gorgeous art by Greg Tocchini, featuring colours by Mariane Gusamo and letters by Rus Wooton, the series is dark, sexy, depressing, and action-packed. Kirk sent me home with this one a while ago, and I would read an issue of it at a time, not wanting to rush it. The story follows the Caine family. In the distant future, the sun is expanding, the Earth is dying and the surviving remnants of the planet have retreated below the surface, in remote cities, where civilization has slowly begun to degrade. Stel, the matriarch of the group, and the center of the story, clings to hope despite all the terrible things that happen to her and her beloved family, and that hope may be realized when a probe returns to Earth, hinting at the possibility of a planet capable of supporting humanity. If they can drag themselves out of the depths, both literally and figuratively.

It’s a troubling world these characters live in, and Stel, her son Marik, daughters Tajo and Della, and husband Joel will face terrible trials just in their struggle to survive, to say nothing of flourishing and reaching the probe that may be waiting for them on the planet’s surface.

Star Wars: Princess Leia Issue 4 This one is written by Mark Waid, with  pencils Terry Dodson, inks by Rachel Dodson, and colours Jordie Bellaire – it took me a while to get used to the art in these books (though I’ve been loving the covers!), it differs from those of the other Marvel Star Wars titles currently available. That being said I’m loving the story. Leia Organa is seeking out the surviving Alderaanians from across the galaxy, trying to preserve what is left of her homeworld and culture, while eluding the Empire. But as they finally track and discover the spy in their midst, Leia is forced to must make an example of herself even if it puts her right in the Empire’s hands.

I’m loving how this book is filling out Leia’s character more and more, and surrounding her with strong and interesting characters, like Evaan, while still very grounded in the universe we know (or think we know) so well. 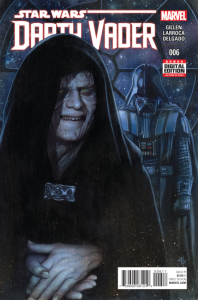 Star Wars: Darth Vader Issue 6 is currently running parallel with the main Star Wars title, and is written by  Kieron Gillen, with art by Salvador Larroca, colors by Edgar Delgado, and by letters Joe Caramagna. Vader comes to an understanding of the real relationship he has with Palpatine as under the Emperor’s eye he must prove himself against the Emperor’s new pet project cyborgs who wield lightsabers. and have augmented abilities, mimicking those of the Force.

But the real kick comes when he learns from Boba Fett, whom he dispatched to track down the rebel pilot who destroyed the Death Star and learn his identity, a certain name that stuns the Dark Lord, as he realizes the Emperor has lied to him about the fate of Padme. The name of Skywalker… A really important moment in the Star Wars mythology that had never been shown before.

Star Wars Issue 6 from writer John Aaron, with art by John Cassaday, colours by Laura Martin and letters by Chris Eliopoulos shook up the Star Wars universe this week, by introducing a couple of now canon incidents in the lives of our heroes… Boba Fett confronts Luke Skywalker on Tatooine in Kenboi’s desert home in a knock down fight, though Luke can’t see him as he’s been temporarily blinded by a flash grenade, and had to rely on the Force and the helpful assistance of R2-D2 to escape the bounty hunter.

Meanwhile, Han Solo and Leia Organa (which makes it tough to figure out when her current series takes place exactly) are seeking a new base for the rebels but the planet they’re on, hidden beneath electrical storms, may not be as secretive as Han thinks especially when a face from his past shows up. This one was the big reveal, and while it will no doubt shake up certain folk, it’s not entirely unexpected, and knowing Solo, there’s bound to be an angle…

Chilling Adventures of Sabrina Issue 3 I caught up on this one this week, by grabbing issue 2 as well. Sabrina’s story continues with writer Roberto Aguirre-Sasca, art by Robert Hack, and letters by Jack Morelli, Madam Satan is in town, Sabrina’s father’s first love, betrayed for a mortal woman, and now she is seeking out revenge on the family. Posing as the high school’s new teacher, she reveals some terrible things about Sabrina’s birthday celebrations to her boyfriend Harvey.

Meanwhile, Sabrina prepares to make her choice, her baptism for the Dark Lord or her possibility of living a mortal life hang in the balance. This one just feels like an update of the Eerie Comics of yesteryear, and the new take on the characters, while being faithful to their origins, is so good! There is dark humor, teen angst, and some creepy supernatural happenings… this one isn’t afraid to go dark, or get bloody!

Harrow County Issue 1 – This one Kirk recommended to me, knowing my affection for things creepy and horrific, and with only one issue, it’s well on its way to be very much both of those things. Featuring a script  by Cullen Bunn, with arts and letters by Tyler Crook, the story opens in Harrow County, where a witch, named Hester Beck, is being put to death. Now this is no falsely accused witch, we’re privy to a flashback seeing her do some evil things. So the towns people stab her, shoot her, beat her, hang her and finally set her alight. But somehow I don’t think that will be enough to stop her…

We flash forward almost 20 years to a tiny country farm, still in the County, where we meet Emmy, who lives with her father. With her 18th birthday on the horizon, she’s starting to think about other things, and longs to get away from her nightmares, the haints (ghosts – real or imagined…), and a terrifying tree on the edge of their property. The issue culminates with a pursuit through the woods, with a frightening revelation at its end… I think this one may very well be one to watch.

What mags have you been reading? Which ones would you recommend? Make sure you pop into West End Comics and check in with Kirk about some great titles!