Rita Moreno is back again as Rita Capkovic in the first episode up this week. No-Fault Affair was written by Juanita Bartlett, and originally aired 30 November, 1979. The phone gag this time around features someone calling thinking the number was for dial-a-joke.

Rita has aspirations of becoming a hair dresser, she’s been to beauty school, and everything. Unfortunately, all the salons she applies to, most in the Beverly Hills area, see her certificate as nothing more than a joke. When her pimp, Al (Jerry Douglas) comes to see her, and refuses to let her go, and giving her a brutal beating to remind her who she works for, she turns to Jim (James Garner) for help.

And while Jim is helping her out, being the nice guy that he is, Rita begins to fall for him, much to Rocky (Noah Beery jr.) and Dennis’ (Joe Santos) chagrin. Jim meanwhile seems oblivious to the fact that Rita has now become completely fixated on him, though it becomes more apparent when she tries to meddle in his love life.

She continues to lie to everyone about her injuries and her work except to Jim, but Rocky keeps trying to get in there and give much unneeded advice on how to deal with Rita and keep her at arm’s distance.

When Al returns, again, and forces Rita back, Jim enlists Angel (Stuart Margolin) to help her out, and in a long overdue moment, Angel actually helps to save Jim’s life, while Rita even takes a bullet for him.

By episode’s end, everything is sorted, and while they both realize they care about one another, a relationship really isn’t in the cards. 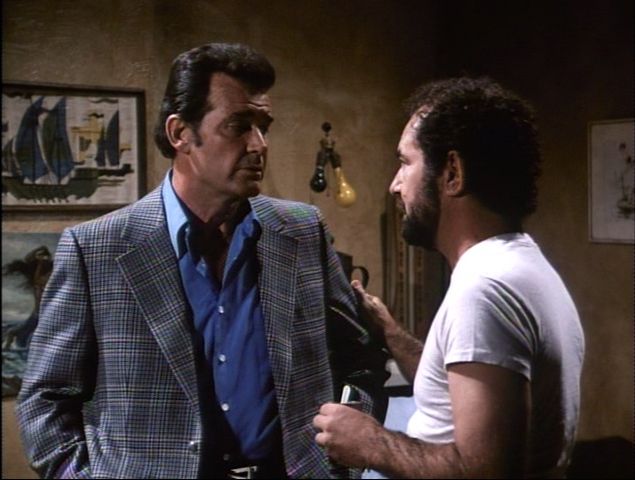 The Big Cheese aired 7 December, 1979 and was penned by Shel Willens. The phone message this time around featured a call from a friend of Angel’s looking to make a deal about selling Jim some information.

Eddie (Francis X. McCarthy), an old friend of Jim’s, is mixed up in something big, and mails a parcel to him. Unfortunately it has something to do with a mobster, Mr. Ryan (Alan Manson), who very much wants the package for himself before it falls into the wrong hands. They aren’t afraid to commit murder for it either, as Eddie ends up dead.

He has a couple of thugs sit on Jim, and the postal service while they await his daily deliveries.

When Eddie is discovered, Chapman (James Luisi) hauls Jim in for questioning. We also learn as a side note, that Chapman is having a bit of a problem with his taxes… This pays off later.

As Jim begins to dig into the case, he pairs up with Sally Packard (Constance Towers), a woman claiming to be a fellow reporter and co-worker of Eddie’s. It’s here that Jim learns that Eddie was working on a series of stories about Ryan. It’s shortly after this that the package finally arrives… it’s not the notebook that they were expecting, but a big roll of cheese. Jim, however, is able to follow the drunken trail left by Eddie, and is able to track it down…

… but Sally isn’t who she says she is…

And next week, would you believe, is the final installment of The Rockford Files series?

But what’s next is so much fun!