Private investigator James Rockford (James Garner) continues his investigations this week, with the follow-up part to Only Rock’n’Roll Will Never Die. Airing on 19 October, 1979, and written by David Chase, the story continues with Jim’s search for the missing record producer. The phone message was from a nice little old lady who’s moving, and she wanted to let Jim know as he takes out her garbage each week.

Trying to figure out who took the shots at him, Jim continues his search, with the less than helpful Eddie (George Loros), who is still pining over Whitney (Marcia Stassman). The more Jim digs, the more involved the tale becomes, there are meddling producers, bootleg albums, money grabs, suing actresses, and Whitney’s reporter causing all manner of trouble in the pursuit of her own story.

The trail leads to Bernie Seldon (Stanley Brock) and the possibility of a missing recording master tape, that consequently flooded the market with bootlegs of Tim Ritchie’s (Kristoffer Tabori) new album. It’s one hassle after another, especially when the missing producer turns up dead.

Temporarily stumped, Jim and Whitney have a chat, and proving that he does want to see his friend happy, he lets Whitney know that Eddie cares about her. But wow, how that plays out! The old adage be careful what you wish for is well on display here.

Jim goes back to the beginning and questions Tim, in a very poignant and moving scene as Tim reflects on his lost friend and producer. The scene speaks very highly to Rockford’s character, and makes for a very nice moment.

In the end, Jim is lucky to be shot of these folks, which lets him dive very nicely into the next episode. 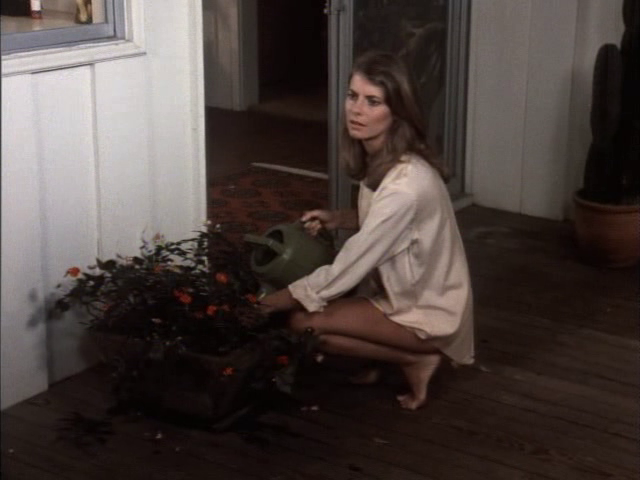 Love is the Word, aired on 9 November, 1979 and was written by David Chase again. This one is a great episode, and once again lets us see a little bit more of the emotional side of Jim, all played out on his face in the beats and moments. The phone message this time around features a call from a bails bong, seems someone Jim had paid a bond for has jumped bail and that means the pink slip on his Firebird.

It’s a great episode, but without the serial nature of today’s television, this episode lacks the real emotional punch it could have had. Jim has been seeing Megan (Kathryn Harrold) on and off for some time it seems (see where the serial nature comes into play already?). She’s very pretty, and sadly blind. They have a pretty basic relationship, no strings, no ties, but when another man shows up in her life, Jeffrey (Anthony Herrera), Jim is a little shook up, He’s even more messed up when Megan reveals that she is engaged to Jeff.

This bothers Jim a lot, but when Jeff disappears and is implicated in the death of a man named Barry Spector, he agrees to help out. Barry’s brother, Kenny (Richard Cox) says that Jeff did it, and Jeff’s own brother, the rather flakey Randy (David James Carroll) is lying about where Jeff is.

As Megan and Jim are thrown together repeatedly through the course of the case, it becomes readily apparent, that their relationship is more than a mere dalliance, and there is a great amount of affection there, which adds a nice, tough emotional resonance to the story.

In the end, everything works out fine for Megan and Jeffrey, and the last shot of Jim in the episode, frozen while the first of the credits runs, says it all. Megan will very much be the one who got away…