The sixth and final season of the adventures of private investigator Jim Rockford (James Garner) get underway this week, with this pair of episodes.

Up first is Paradise Cove, written by Cannell, this one aired 28 September, 1979. The phone message to start the season off came from an environmental group telling Jim that the whales need him.

Things seems to be going rough for Jim and Rocky (Noah Beery Jr.), his dad has broken his leg, and Jim is being pressured to leave the beach due to the unseemly activities that seem to happen around his trailer. The charge is being led by a retired sheriff, C.C. Calloway (Leif Erickson), who apparently has enough sway and power still, despite wandering back and forth on the beach all day with a metal detector, to warrant an officer of the court, Althea Morgan (Mariette Hartley) to come and start going through Jim’s things to sell them off, while also coming up with the idea that he work security for the beach community he lives in.

Angel (Stuart Margolin) shows up to help, as Jim learns that C.C. has been searching for a missing treasure of gold bullion from the 30s, when he was in law enforcement, and that it may very well be under Jim’s trailer. Unfortunately, as they all join forces, they learn they aren’t the only ones looking for it.

This was a great episode to start the season with, fun, smart, and engaging, hit all of its marks from the get go, and there’s a wonderful chemistry between Jim and Althea. It’s gonna be a great last season! 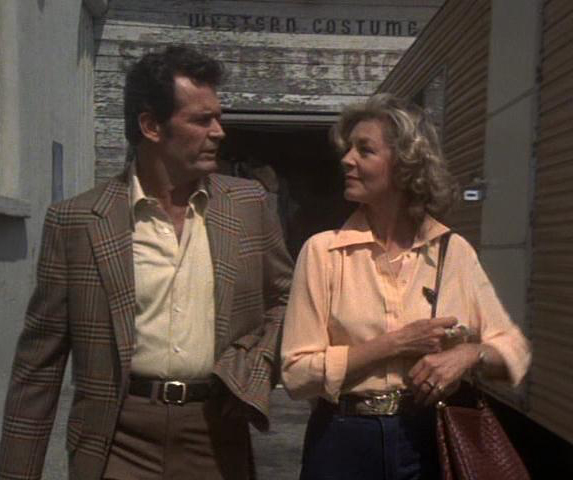 The next episode, Lions, Tigers, Monkeys and Dogs: Part 1, was penned by Juanita Bartlett and aired on my birthday(!) 12 October, 1979. The phone message this time around, features a call from a lady friend stuck at a pizza joint and didn’t know who else to call.

Screen legend Lauren Bacall guest stars as Kendall Warren in a plot that sees Jim hired by a princess, Irene Rachevsky (Dana Wynter). The princess thinks someone is trying to kill Kendall and would Jim please look into it. He quickly finds himself a world of parties and the well-to-do. He also realizes that the princess is right, someone is after Kendall, as he learns at a costume party, but she wipes the veneer off the perception.

Jim and Kendall hit it off but the private investigator feels uncomfortable and intimidated by the ‘upper class’ nature of the world he finds himself in. She puts him at his ease when she points out the foibles and ways that the ‘upper class’ have all bought their way into the elite.

Jim and Kendall find the man responsible for the attempt on her life, Richie (Charlie Picerni), a mixologist, who takes a fall off a building before Jim can learn anything. However when the police investigate, Kendall finds out Jim was hired to keep an eye on her, which puts a strain on the relationship that was developing between her and Jim.

But Rockford believes there is someone else behind the attempt on Kendall’s life, that Richie was hired, and took it in an effort to clear his debts. The episode closes as he plans to look into it further while Angel tries to find a way to meet the Princess.

I love the fact that Rocky is rather taken with the idea of the princess and has a rather set image of how she must be, one Jim has some fun with. This was a fun one, and I can’t wait to see how the story wraps up next week!