Sure, it took me a while to get to this one, but it’s been a big month, and for me this is worth the wait.

With recognizable influences from 2001: A Space Odyssey (the return of silence to space, and walking, talking robots that resemble the iconic Monolith) and Contact (not the least of which Matthew McConnaughey, and a strong female character driven by the loss of her father and her own genius), Interstellar simply wows. Sure, I have heard issues on some of the science, but the story works, and despite rumors, I was pleasantly relieved to see that the science was so very dumbed down.

With the gorgeous VFX shots in IMAX I was simply stunned, repeatedly, and felt the longing that has been in my soul since I first looked at the stars… we should be up there; exploring, discovering. And I like the idea, very much, that there is nothing out there that we don’t take with us, including our darkness.

Matthew McConaughey is Cooper, a pilot/engineer, turned farmer, as the world tumbles into decay, crops dying due to blight, and the undeniable approach of a whole new dust bowl, things that will doom humanity if it stays in the cradle, that is Earth.

When  Cooper comes across an old colleague, Professor Brand (Michael Caine), and a hidden enclave of a still-operating NASA, a plan is put before him. He can join an expedition, to discover a habitable world on the far side of an artificially constructed wormhole that has appeared near Saturn. 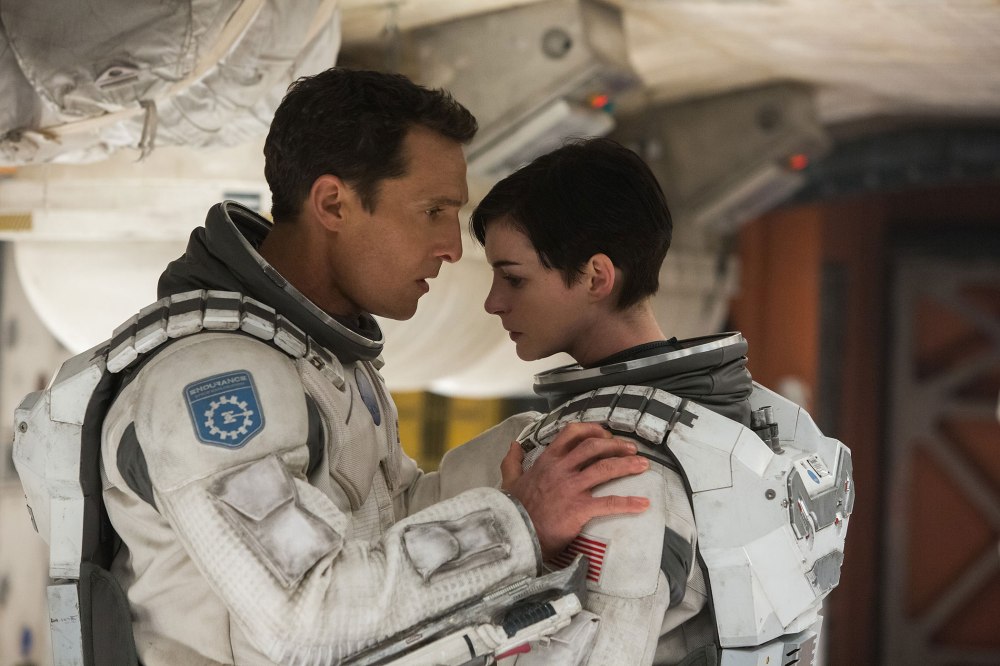 Leaving behind his family, including his driven daughter, Murph (Jessica Chastain), with a promise to return, Cooper goes on an incredible mission, spanning galaxies, with humanity’s existence hanging in the balance.

It’s a stunning ride, an impressive ride, rounded out with a brilliant supporting cast including Anne Hathaway, John Lithgow, Wes Bentley, and Casey Affleck. I sat there wonderfully gob-smacked through it all, watching the gorgeous space shots, as the Endurance moved across screen, silently, majestically, so human, and so fragile against the immense tapestry of black and stars.

McConnaughey is ably cast in the lead, and watching his performance, especially in the heartbreaking sequence featuring the discovery of a huge time shift, shows an actor at the top of his game.

I was happily surprised by the robots, because when they first appear in the film, I questioned their mobility, and despite their similarity to the Monolith, or perhaps because of it, I wasn’t always sure I could trust them. By film’s end, they are just as much a part of the crew as Cooper, Brand (Hathaway), Doyle (Bentley) and Romilly (David Gyasi).

After Guardians of the Galaxy, this may be a film that I see in the theater a couple more times, especially in IMAX, because those visuals are so stunning.

The story is wonderfully epic, and yet intimately human at the same time, and I honestly cannot wait to see it again. This is the Nolan I love, Dark Knight Rises is forgiven… More of this type of smart film-making please.