Sure, we’re only part way through November, but this was the next title on the recommendation list from Great Movies – 100 Years of Film book following my screening of the Jazz Singer.

And would you believe that this is only the third time I’ve actually watched it?

Bing Crosby is paired up with Danny Kaye this time around (and as fun as they are, they lack the chemistry that Bing has with Hope). meeting during World War II, they pair up when the war is over and become a big song and dance team, Wallace and Davis, Crosby and Kaye respectively. They have one hit after another, and have become incredibly successful, but that doesn’t stop Davis from wanting to play matchmaker with Wallace, and find him a lovely woman to settle down with.

Enter the Haynes sisters, Judy (Vera-Ellen) and Betty (Rosemary Clooney), who have a fun little act themselves, and Davis sees not only the chance for a new act to be added to their show, but perhaps some romantic entanglements for the pair of them. So instead of going to New York like they are supposed to, they follow the girls to their booking in Vermont. They are supposed to be putting on a floor show in a lovely hotel. 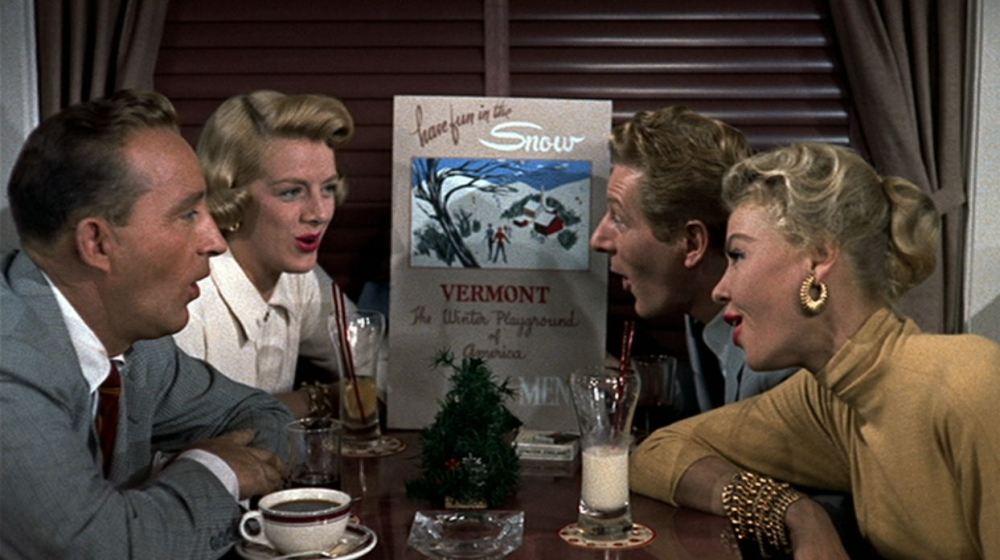 Unfortunately, there’s been no snow, no matter how much singing about it the quartet do, and the hotel is empty. Before the can return to the city, the boys learn that the hotel is run by their former major general, Waverly (Dean Jagger). So the foursome put a plan and a show together to save the hotel.

This is an all out musical, with the occasional song appearing out of nowhere and Kaye and Vera-Ellen doing some lovely dance sequences. The pair of them move together very well, and the production around them looks fantastic. Bing gets to sing some great tunes, and he and Clooney do a lovely rendition of Blessings.

The film is filled with music, dance, comedic moments, some nice drama, some romantic misunderstandings, and I personally loved the way they tied it all in with the major general, but a lot more men were in the battalion at the end of the movie than I thought there would be. Still, it’s a nice moment, and you can see that it resonates and means the world to Waverly, though he may not admit it.

It’s a joyous feel good film that has stood the test of time through its music, its dancing, and the story, all brought to life by a talented cast. As such it’s easy to see why this one has become a perennial favorite.