Mistaken identities seem to be the key to both episodes this week, as Jim Rockford (James Garner) gets wrapped up in a couple more cases.

First up is Dwarf in a Helium Hat, which aired 27 January, 1978. It was written by Cannell and David Chase. There’s a missed opportunity with the phone gag this week. A bookie calls and gives Jim the rundown on the money he owes… anytime before Friday.

Jim gets a phone message, but this one is meant for someone else, Jay Rockfelt ( John Pleshette). It seems his name is right above Rockford’s in the phone book, and they called Jim by accident, warning him that he and his girlfriend, Carol (Rebecca Balding) are next.

Jim tries to get in touch with Jay, through Carol, but Jay doesn’t seem entirely bothered. He seems more interested in partying up with his rock star friend, Keith Stuart (Rick Springfield). Jim tries a number of times to walk away, but phone calls keep bringing him back into it, much to his chagrin.

Everything comes down to a mobster, Gianni Tedesco (Gianni Russo), money and his birthday party.

It’s actually a pretty enjoyable episode, and it’s very cool to see Rick Springfield guesting, even if it’s a fairly small role. There are some fun moments, and Jim just wants to walk away from this case, and he just can’t no matter how many times he tries. 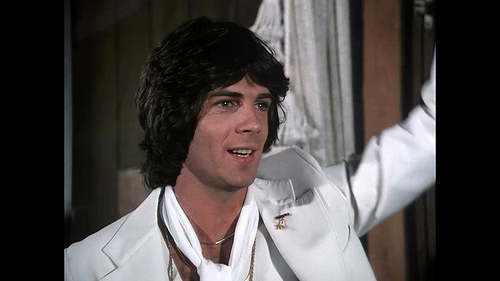 The second episode, South by Southwest, as the name implies, is a bit of a nod to the Hitchcock film, North by Northwest. It screened 3 February, 1978 and was written by Juanita Bartlett. The phone message this episode features a call from a private detection outfitter who is willing to demonstrate a new telephone bug with a free weekly offer.

Jim is picked up by a couple of Feds, who through a foul-up in communication and paperwork think he is someone else. Before he can sort anything, or even talk to anyone in charge, he’s hustled off to an airplane, and finds himself in a South American country, on his own, confused, and supposed to get in touch with a local contact and help rescue an heiress, Christine Van Deerlin (Dorrie Kavanaugh) from her oppressive, and dangerous husband.

For once, I wasn’t a big fan of the story. This one just didn’t keep me involved like most of Bartlett’s have prior to this. But from a guest star front, I loved seeing a very familiar looking actor in a supporting role, character actor, Bert Rosario makes a fun appearance.

And just like that, we’re closing in on the end of Season Four! I can’t believe how quickly I’ve ended up flying through this series. Sure there are 37 episodes left yet, but this one was number 85!

I really have loved revisiting this series. So, until next week…