Releasing today on DVD from Anchor Bay is a nice take on the found footage film, combining reality television with a hint of Rosemary’s Baby, and a touch of Paranormal Activity.

Rachel (Laurel Vail) and Kyle (Danny Barclay) after years of trying, are finally expecting. And they’re also the subject of a new reality show that will chronicle the ups and downs that go with pregnancy and relationships.

The first part of the film, after our introduction to the idea and the characters is the pilot episode of the show, and I honestly like the way this works, it’s not something you would often see in a horror movie, and it’s fun to see the relationship dynamic not only between Rachel and Kyle, which isn’t always smooth, as well as Kyle’s interactions with Rachel’s mother, Barbara (Rebecca Brooks) and his love for his dog.

After a troubling, and bloody incident, which may or may not have been a miscarriage, things start to get darker, and the pilot episode is left behind as we watch a compilation of the remaining footage that was shot for the show. Strange things begin to happen, there is electrical interference on the cameras whenever Rachel is around, doors slam, arguments increase, Rachel’s artistic endeavors as a painter become a little creepier, the name Alastor, often associated with demons, makes an appearance and violence seems imminent. 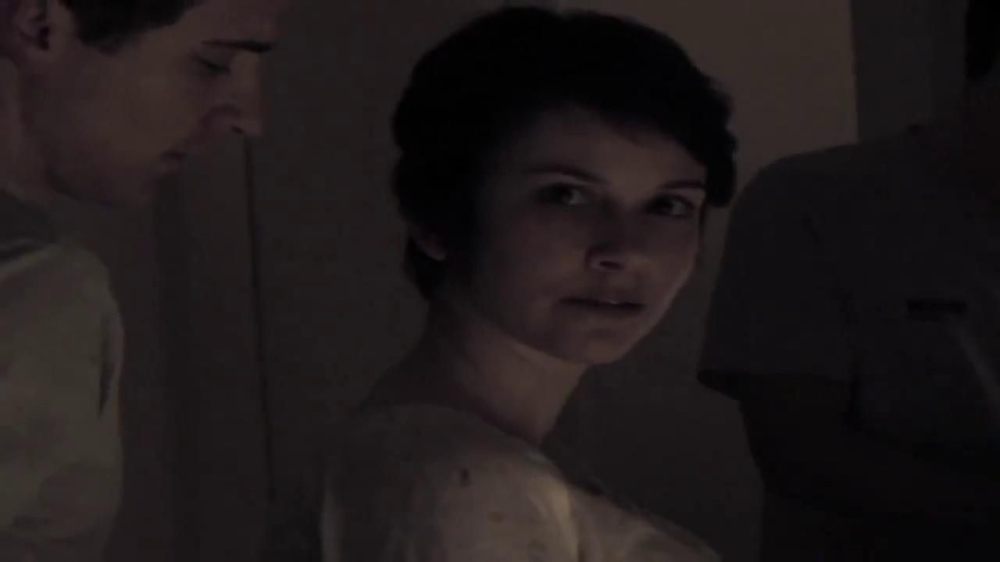 The biggest problem with the film is that the creepiest moments, as there really isn’t anything incredibly scary in this one,  if you’ve seen the trailer, then sadly, you’ve seen all the spookiest moments in the film, and thus, it loses a lot of its impact when they happen within the context of the story.

There isn’t a lot that is new in this film, though as mentioned the reality show aspect of its beginning is used very well. I think I would have preferred something that was a little more developed in terms of character and story, perhaps following Rachel’s descent into fear and madness a little closer, and other spooky, unexplained incidents that happen on camera. For what it is, it does do it’s job, and works as an update on the tried and true (and even over-used) demon child story.

Both Vail and Barclay are likable onscreen, but I wish both had been given a little more to do. I mean there are sequences where things occur, and I would want to follow-up, investigate, research, but no one seems motivated to do so. They could have padded this one out a bit more, and broken it out of the found footage genre, which at this point, really has started to over stay its welcome.

So, if you’re looking for something to pass an evening, like reality television, and Paranormal Activity this one may fit the bill. If you do plan on watching it, don’t watch the trailer first, just simply throw this one in the player, turn the lights off and go.

Delivery: The Beast Within is available today from Anchor Bay.