After a quick recap of last week’s episode, Jim Rockford (James Garner) gets thrown right back into it with this week’s installment.

Picking up where Part I left off, Part II of The Trees, The Bees and T.T. Flowers, written Gordon T. Dawson, aired on the 28 January, 1977. The phone gag features a woman just saying “hello?” over and over again.

Jim is able to slip out of the cliffhanger we left him in last week with T.T. Flowers (Strother Martin) and he digs further into what is going on in the land grab, with its tie-in to the home to which T.T. had been committed.

After seeing how the first episode opened with the memorial service, it was fun to watch the whole thing play out, especially when it looked like not only T.T. had been killed off, but it looked like Jim was in some pretty dire straits before this episode’s end. Happily though, he tends to be more clever than his adversaries give him credit for, and he had a plan in action, and brought everything around to a happy resolution.

Well almost. It seems T.T. still has a problem with his neighbor spraying pesticide and ruining his farm, and endangering his animals, so the episode ends, quite literally with a rock fight.

This two-parter was smart and fun, and gave not only Garner, but his supporting cast a chance to shine as well. I loved Beth’s comments when dealing with Muellard. 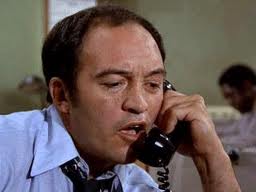 Becker is in trouble this time around in The Becker Connection. which aired 11 February, 1977. It was written by Juanita Bartlett from a story by Ted Harris and Chas. Floyd Johnson. The phone gag this time around features someone who has mistakenly called looking for dial-a-prayer.

Becker has spent the last month on a rotation in Narco, away from his usual assignment in Robbery/Homicide, he’s having a bit of a stressed out time, and blatantly ignores his friends, and his wife who have organized a huge surprise party for him.

When he’s called into his lieutenant’s office, he’s shocked to learn that he’s been suspended and that he is suspected of having stolen, and consequently sold packages of heroin. His tight financial situation doesn’t help his case.

Pleading with Jim, who never takes active police cases, especially ones involving Internal Affairs, Becker finally persuades his friend to dig in to it, cautiously.

The further he digs though, the more troubling things Jim finds, and realizes that perhaps, one of Becker’s friends may have in fact set him up.

This one shows the handle that Bartlett has on all the characters, and I find her scripts tend to help build the show’s mythology in the developing relationships and histories of the characters.

Looking forward to seeing what Jim gets himself messed up with next week!